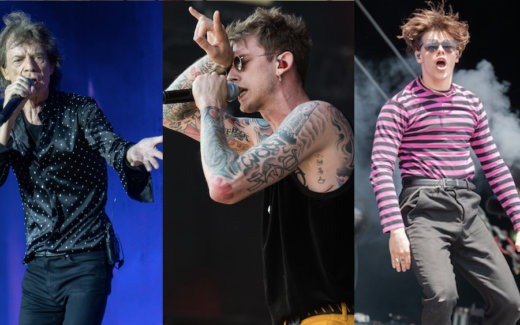 When people lament the death of rock music, or how rock music is in decline, or that it needs saving, they usually fall into one of two categories. The first is old-timers who have no concept of an underground and are making blanket statements about what they’ve been served by mainstream media outlets. The other is young musicians who are making rock and have convinced themselves/been told by the people they surround themselves with that they’re doing something new and recolutionary. And now, the former has come out in support of the latter, as Rolling Stones frontman Mick Jagger has listed Machine Gun Kelly and Yungblud as the only rock singers he can think of who are keeping rock music alive.

In an interview with Swedish radio station P4, Jagger offered up the young artists who he believes are keeping rock going (via the Independent):

“In rock music you need energy and there have not been a lot of new rock singers around. Now there are a few.

“You have Yungblud and Machine Gun Kelly. That kind of post-punk vibe makes me think there is still a bit of life in rock and roll.”

So there are a few of things to take away from this. One is that Jagger is a British musician, and the two “rock” acts he’s mentioned are HUGE in the UK — Machine Gun Kelly is massive there, as the Brits love that polished, manufactured Cool — so it’s unsurprising that these are the artists served to him the most, and therefore the ones that come to his mind. The second is that the Rolling Stones exist on a level of stardom and mainstream recognition that we can’t even fathom, so in Jagger’s mind, if you’re not even close to that level, are you even making art?

Suffice it to say, if you’re taking your music recommendations from Mick Jagger in 2022, you probably already thought these artists were awesome, because you like that kind of rock star horseshit. But if you’re reading MetalSucks regularly, we doubt that’s the case.

The post Mick Jagger Says Machine Gun Kelly and Yungblud “Make [Him] Think There Is Still a Bit of Life in Rock and Roll” appeared first on MetalSucks.