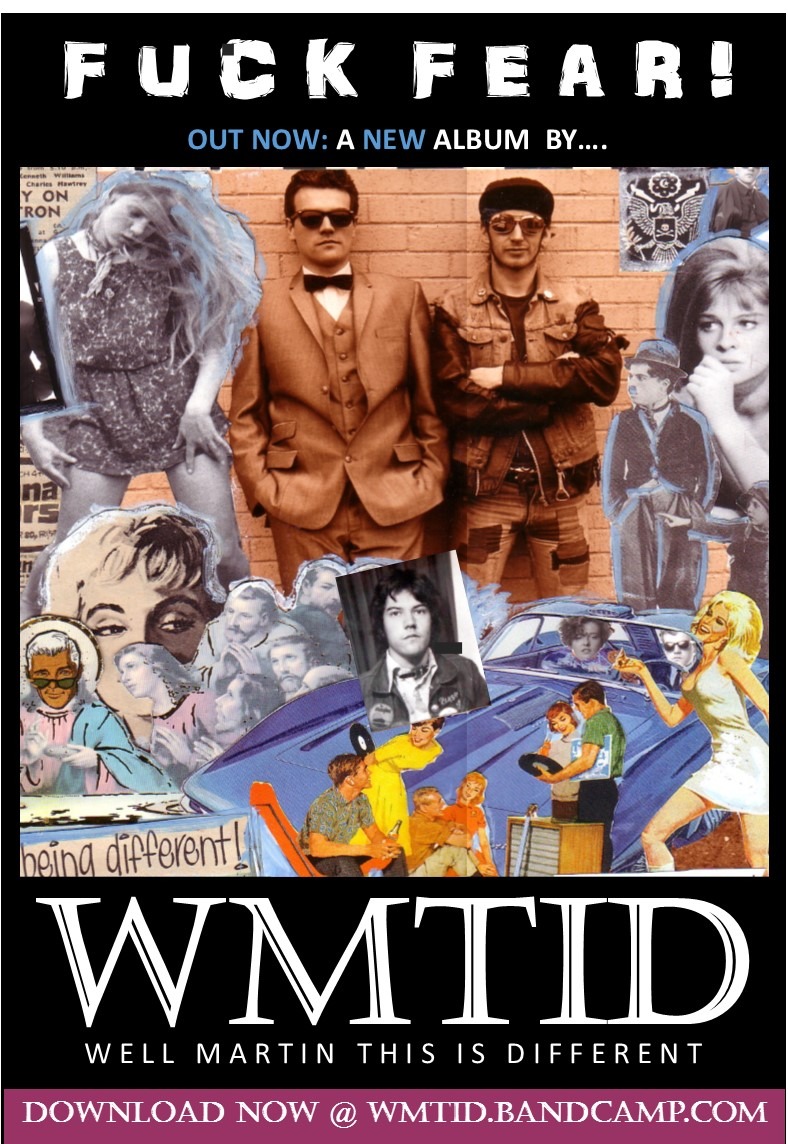 What do you get if you cross an infectious mischievous mindset with David Bowie, the Sisterhood, Laibach, KISS, Charlie Chaplin, Martin Luther King and post watershed Sixties kids TV? Look no further than GENERATION F By WMTID Largely unreleased, mostly remixed re-threads of mass distraction. Over 55 minutes. Ten trax. FREE TO DOWNLOAD (or donation) NOW https://wmtid.bandcamp.com/album/generation-f

There was never any danger of WMTID being a ‘known’ act. There was nothing I could do to compromise my values which would always be of an infinitely higher level and quality than my music which is experimental at worse, seditious and mischievous at best. So, unless you are prepared to throw your values, integrity, et al into the bin there’s no seat at the big table for me, meaning my musical half-life would be a can of chum old pal.
Catawalling and spitting from the cheap seats at the rear of the hall rarely got anyone’s attention but Punk had shown me the merit of being different, chomping at the bit, snarling at the establishment and generally making a fine old arse of oneself. I couldn’t resist throwing curve balls to see what would happen.
So… samples…make fine curve balls and when they work, I sincerely believe you are not stealing another person’s ideas, soul or creativity any more than when you employ someone else’s pictures or images from a magazine to make a new ‘thing’…a collage that takes on another life, meaning and context. Musically, if samples are skilfully employed, they can create a musical collage as such. It doesn’t always go to plan, but the intention is still good especially when making a social, cultural or political point. Hey, who could put down fascism better than Charlie Chaplin in The Great Dictator or Martin Luther King in respect of racism and inequality. If my music in any way aids the message, then…and of course it’s often an audacious step but should anything be off the table when making music? There’s no issue with honesty here. What I and choice pals have done via WMTID is herewith and whatever laid bare and what you see is…
On ‘The Electric Church’ album there’s a whole track devoted to Robocop… with sampling throughout set to an urgent electronic beat. It works. By way of contrast on the second album ‘Pale Saint’ I change the lyrics (not the tune) and rip mercilessly through the Bee Gee’s ‘Tragedy’. It was an unmitigated disaster as they say. No sampling here just a plain sh*t rewrite!
When it works however… Exhibit B: find here the track Beso De La Muerte.These ten tracks trace WMTID from a prepubescent Well Martin This Is Different gaggle of innocents through two albums and into the wilderness. A great chunk of this compilation shows what WMTID had become. The entity had skewed from the ‘Land Of Silence’ and ‘Blood Like Water’ shambly naïve pop sounds via ‘9 Years’ and the transformation into sample heaven or hell. So, be prepared for samples lifted from Bowie, Laibach, Martin Luther King, Charlie Chaplin, Kiss and the Sisterhood.
There’s a lot to be wary of and each track I will dutifully footnote.
credits
released November 5, 2022