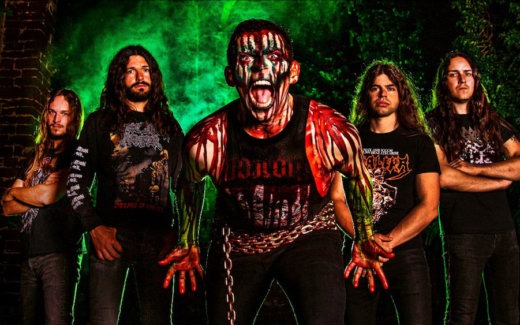 When it comes to contemporary old-school death metal, few bands are as consistently fucking rad as Belgium’s Carnation. Last year’s Where Death Lies was one of those albums that just gets you feeling like a dehydrated longhair in a leather jacket from the moment it kicks off to the last note. Now, the band have dropped a new single, “Stench of Death,” and guess what, it slaps ass with the lights on!

The downside is that right now, “Stench of Death” does not signal the release of a new Carnation album. The upside is that the single will be released as a 7″, with the other side featuring the band’s cover of Entombed’s “Supposed to Rot” as a tribute to the late L-G Petrov! So basically, though you have to wait for more new Carnation, you can enjoy this track AND, come October, pay homage to one of Sweden’s greatest metallic exports.

Says the band about the new song:

“We are back with full force to present you our newest track, bursting with relentless aggression! ‘Stench of Death’ is our personal antidote to the events of the past two years. It is the sonic embodiment of our unwavering determination to push forward. This new track will be released digitally, and on a limited 7″ Vinyl. Side B will contain our rendition of Entombed’s ‘Supposed to Rot,’ a cover we have been performing live for many years… Cheers LG, R.I.P.! Fueled with this renewed vigor, we are once again ready to strike across the European mainland during the upcoming months. Embrace it, the Stench of Death!”

Fuck yeah, boys, let’s all get lit up on moonshine with a toenail in it and kick over some gravestones. I’m sweaty, angry, and semi-fuckin’-erect.

Check out “Stench of Death” below. The band’s 7″ single is available for preorder now via Season of Mist.

The post Unsurprisingly, the New Carnation Track Is a F***in’ Rager appeared first on MetalSucks.