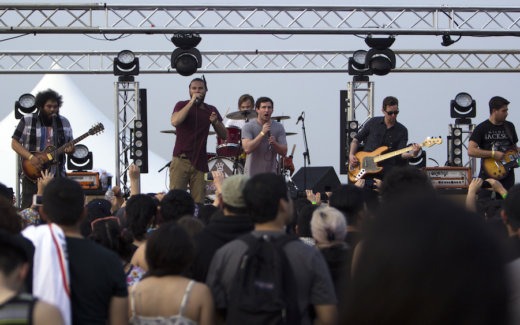 On Wednesday, Dance Gavin Dance frontman Tilian Pearson responded to sexual assault allegations against him posted to Reddit. Now, the band has officially announced that they’ve let him go.

As reported by Loudwire, a Reddit user posted a 6,000-word recollection of a short relationship she had with Pearson. They interacted under the influence of alcohol, and began to engage in sexual activity, when Pearson slapped her, in what she describes as “an attempt to be sexy.” She asked Pearson not to do it again without permission, but he continued striking her. Later, the two met up at an AirBNB where Pearson allegedly repeatedly acted against her consent and kept her from leaving. You can read the entire post on Reddit.

Pearson then released the statement below:

“This morning I was made aware of allegations from someone regarding a brief relationship surrounding the weekend of Swanfest. Admittedly, this was a time when I was very vulnerable, but I can assure you that every sexual act was purely consensual. Since then, she has reached out to me multiple times wanting to see me again. We met again later in Cleveland on tour, and I decided to end things the following day. It was an amicable split, so this story coming out is extremely surprising.

“I have text threads saved that paint a picture of the nature of our brief relationship, but I would prefer not to have to air that out.

“It pains me a bit because I thought there was a general lightheartedness and sweetness that wasn’t mentioned in her version.

“I take the subject of sexual assault seriously, and I want to firmly reiterate that there was no moment of anything happening that was not consensual. I understand that in a new sexual relationship, there is a period of figuring each other’s preferences out, but there is not a doubt our physical contact ever crossed boundaries into anything resembling assault.

“My general state of mind surrounding the weekend was filled with grief, and I was leaning on alcohol as a crutch to get me through it. After Swanfest, I did the tour sober to properly grieve and got a lot of support from the band and friends.

“Although her story saddens me to read, I won’t express any ill will toward her.

“I hope this clears things up, and thank you for listening.

“The recent allegations against Tilian are something we take very seriously, and we have been in deep discussion regarding the appropriate action.

“Effective immediately, Tilian will be stepping away from the band in order to seek professional help.

“Jon, Will, Matt and Andrew will continue on with all currently scheduled dates. The band will also be proceeding with the release of Jackpot Juicer as planned.

“We all worked incredibly hard on this album, and it is also the last recorded body of work from Tim [Feerick, the band’s bassist who died earlier this year] — we want to be sure to give it the full release attention it deserves to honor its legacy.

“We know that this is a very try and upsetting situation for all those affected, and we ask people to please be as understanding as possible while everyone works through this.

“We appreciate you always.

More on this story as it unfolds.