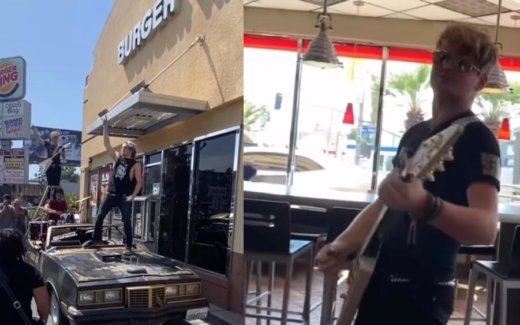 There will always be those who like the second-favorite more than the first. They will always claim Pepsi is better than Coke, that American Dad is funnier than Family Guy, that Reebok is superior to Nike. Whether or not they’re right is often irrelevant — what usually matters to these people is that they’ve chosen something less popular over the more common choice. Case in point, one metal band has decided to make it known that they love Burger King first and foremost, taking a cover of AC/DC’s “Thunderstruck” to the drive-thru of their favorite restaurant.

The band in question is Vella la Vella out of Hollywood, who have it their way by performing the AC/DC classic on a convertible rolling through a drive-in. The band also storm the front desk, throwing the horns to their favorite burger, the almighty Whopper. That said, it should be noted that these guys are…honestly, there’s really no better way to put it, burger sluts, having also posted a video of them assailing the drive-thru of Chik-Fil-A, and famously shutting down a Wendy’s drive-thru some years ago with their antics. What, Vella la Vella, the Whopper wasn’t good enough for you? The nuggets at Burger King couldn’t satisfy your need for chicken? Does the Whopper know that while she’s at home, taking care of the Whopper Jr., you’re out there plowing a Baconator? You WHORES.

The band’s siege of the grilled-in flavor temple is just one of many ways in which the fast food world has entered the mosh pit over recent years. The frontrunner of this trend is undoubtedly Wendy’s, who use the annual National Roast Day to smash the self-esteem of metal and hardcore bands; this year’s crop included Lamb of God, Underoath, and Winds of Plague.

Anyway, watch the Whopper fanaticism below: