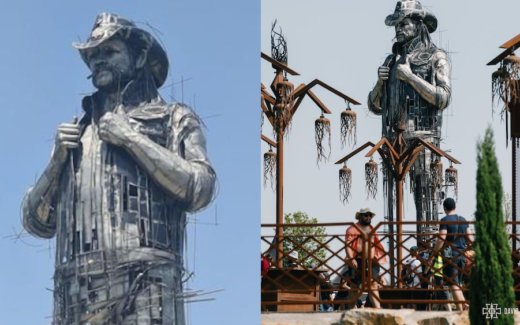 This year’s Hellfest festival in France features more than 150 bands and a headlining set by Ghost cut short by the unfortunate loss of Tobias Forge’s voice. But it also included a fucking massive statue of Motörhead frontman Lemmy Kilmister, which basically makes it the best event of the year as far as we’re concerned.

As you’ll see in the photos below via Blabbermouth, the new Lemmy statue replaces an old one erected six years ago that was falling apart — but honestly, who cares, this one is so much cooler in its weird ghostliness and bio-mechanical vibe.

The new sculpture was created by rising French sculptor Caroline Brisset, who’s work has been exhibited in. bothFrance and Belgium. She told Ouest-France, “I said yes because it was a great project. And it was also quite a challenge to make such a big statue in such a short time.”

Check out this awesome tribute to metal’s most awesome frontman below.

The post They Erected a New Giant Lemmy Statue at Hellfest, and It’s Awesome appeared first on MetalSucks.