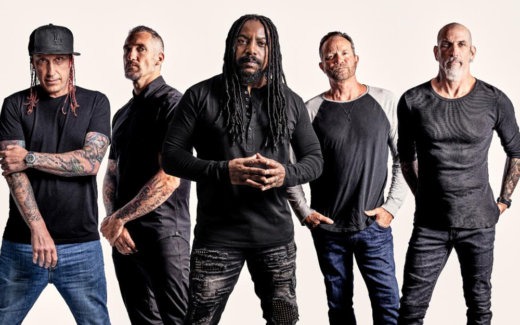 We definitely think of Sevendust as a band who at least feel like they’ve been around forever. The hard-hitting hard rockers have been writing powerful, inspiring chug riffs for as long as we can remember. But all good things must end, and it’s better to go out according to your own standards than hang around until your legs give out under you — which, according to drummer Morgan Rose, is exactly what Sevendust intend to do.

Speaking to Hatebreed frontman Jamey Jasta on his podcast, Morgan explained that the band had recording and touring plans in the works, but that there was an end in sight. Here’s what he said, as transcribed by Blabbermouth:

“I go to Kansas on the 20th. We’re gonna finish up the writing for it then. I’ll be there for, like, a week — me and the rest of the guys are going to Kansas to rehearse and work on the rest of these songs. And then I think the 10th or the 11th of July, we move into the studio for six, seven or however many weeks it’ll take [to record the new album]. Finish that. And then we’re gonna do one more run of the ‘Animosity’ anniversary [dates], ’cause people seem to like it. So do one more run of that. And then that might be it for a little while. We’re not gonna tour the new record until next year at some point. There’s not gonna be many left, I’ll just tell you that. I’m gonna be the one to let all the cats out of the bag, but I can just tell you that we’re not gonna be around, full-fledged, forever, that’s for sure.”

Jasta went on to urge him to do a massive “four-year farewell tour,” which is when Morgan really got into it:

“There probably will be something like that. The funny thing is Slayer is a legendary… They’re Slayer, you know. But regardless, relatively speaking, we have such close relationships. I started thinking about it. I mean, we did discuss this — the band has discussed, like, when’s the end date? ‘Cause it’d be nice to do it on our own terms and it’d be nice to be able to say goodbye to everybody properly. And I got emotional when we were talking about it, ’cause I was, like, there are so many people that we’re friends and really consider very close that I don’t hang out with. You have these, for sure — people that you’ve met on the road that you see ’em wherever it might be and you’ve seen ’em so many times that you know them absolutely by name and maybe you even have a drink or food or something when you go through town, but you don’t hang with them other than that. And we’ve been [touring for] 26 years, and there’s a lot of those people. And it’s, like, shit, dude — that’s gonna be, like, ‘Bye.’ We don’t talk. We only talk when I come here. And we’ve been talking, for some of these people, for 25 years. And it’s, like, damn. There’s a lot of those people. And it fucked me up a little bit. I was, like, that’s gonna be interesting to wave the stage that night and be, like, ‘Damn,’ and fuck off forever. ‘Cause it obviously has been a gigantic part of our lives — more than half of it has been spent out on the road building those relationships. So it’ll be a trip.

“We’re pretty fucking old to begin with. Somehow or another we’ve kept it together enough to be able to still do it at a respectable level. But it’s gonna happen. I would be lying to you if I told you I didn’t know when. It is gonna happen. But we’re not saying anything.”

Well, look, no more Sevendust? Bummer, for sure. But Sevendust gracefully saying goodnight and no longer playing the game as furiously as they have for so many years? Fuck yeah, boys. Don’t let the world cheer you on into doing anything you don’t want to do. I’m always for bands knowing when to call it.

Check out the full interview below.

The post Sevendust’s Morgan Rose Says The Band Will Call It Eventually: “I Would Be Lying to You If I Told You I Didn’t Know When” appeared first on MetalSucks.