April 15, 2022 – Cathedral In Flames were slowly preparing for live shows and writing their next record during the Covid pandemic when Vladamir Putin and Russian armed forces invaded Ukraine.

The band immediately decided to take action. They will donate all royalties and proceeds from their Hang Me High And Bury Me Deep record to support Ukraine, specifically to run Nexta, an independent news channel that brings the breaking news from across the battlefield. 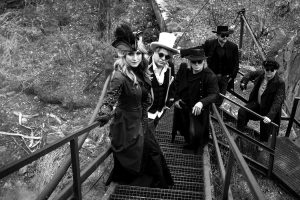 In order to draw attention to the cause and raise additional funds for Ukraine from their fans, the band decided to record a cover version of Nick Cave and Blixa Bargeld‘s duet “The Weeping Song”.

Phil Lee Fall says of the whole thing, “The war in Ukraine is horrible, the terror on children, innocents, the helpless. This song is maybe about crying, but at the end it sings “… we won’t be weeping long” because I’m convinced that Russia will be defeated in the end.” “Support Ukraine, Putin udi na chuj,” ads Gatsby.