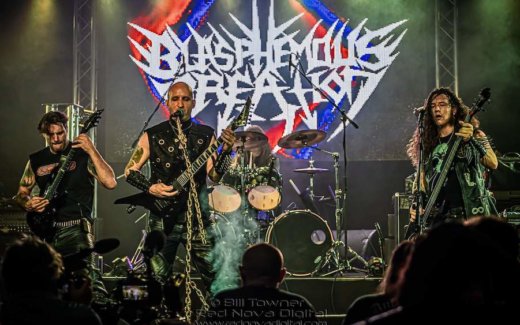 If you want metal that makes you trip the light fantastic, well, you might want to skip the Blasphemous Creation show. Or maybe you shouldn’t miss it, actually — maybe Reno’s Blasphemous Creation are exactly the band you need in your life. These guys are full of beans, bringing old-school death metal that retains the genre’s early thrash roots while staying entrenched in its latter-day extremity. This isn’t cavernous, or progressive, or meant to appeal to people who only like death metal of a certain type — this is driven, pulverizing music for fans of good times through madness and morbidity. It’s fucking rad, is what it is.

One only has to listen through Blasphemous Creation’s new EP Beyond the Grave to know what we mean. While the title and cover definitely get across the band’s stalwart appreciation for classic death metal — I mean, you can’t go wrong with a title like Beyond the Grave — the music thereon is more frantic and furious than self-described ‘OSDM’ fans might be expecting. This isn’t a record of galumphing anthems to Raimi and Romero, it’s an excitable flurry of really hard-hitting riffs, drumming, growls, and even basslines. One can hear influences like early GWAR, CoC, and Bathory on this album, even if it’s primarily inspired by Altars of Madness and Seven Churches.

Check out our exclusive stream of Blasphemous Creation’s new album below. Beyond the Grave comes out this Friday, June 17th, on Horror Pain Gore Death, and is available for preorder.

The post Exclusive Album Stream: Blasphemous Creation Trample You to Death on <em>Beyond the Grave</em> appeared first on MetalSucks.