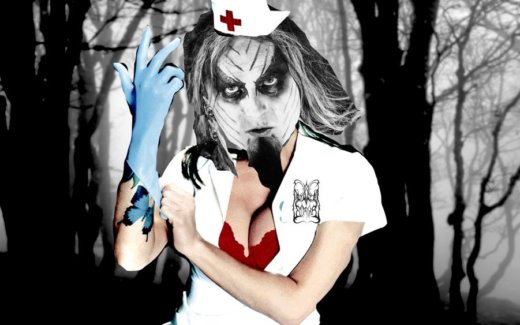 No matter how hardcore, blasphemous, or chaotic it sounds, every song has been the soundtrack to someone getting fingered. There is no song in all of creation that has not played in the background of one person pressing at least one finger into the willing hole of their lover. And while metalheads often seem oddly proud of their music’s lack of eroticism, it is undeniable that even extreme metal has been put on the stereo during a solid fingerblasting. The law of averages makes it so.

When we thought of a band whose discography felt like it was littered with fingerblasting tunes, one immediately jumped to mind: Norwegian symphonic black metallers Dimmu Borgir. But not all Dimmu songs were created equal, so we decided to put together a playlist of their most blast-appropriate tunes. And for the record, let’s make something clear: we’re fans of fingerblasting between willing adult partners of any gender, age, or background. If you like digits up in you, good for you — just make sure you take ’em to one of these songs.

First of all, how can you not get your guts plumbed to a song named “Entrance?” You hear that and basically imagine the view of the act from inside of yourself. Second, there’s a headbangable rhythm to this track from Behold Darkness Triumphant which allows for dependable yet thorough blasting. Sure, the track’s little sparkly around the edges, but hopefully your vision will be too by the time you’re done getting shockered.

This track somehow manages to go both huge and creepy. You get all of Dimmu’s orchestral madness at its purest, born of Puritanical’s awesome timing for the band. But the track remains centered around the riff, letting Dimmu’s blazing guitar sound do a lot of the work for them. This one-two makes it an atypical song for having someone’s fingers inside of you, but also a very primal and animalistic song to rock against someone’s palm to. It shouldn’t work, but it does, which you’ll find out.

Look, when you think of getting fingered, there’s only one name that comes to mind other than that of Dimmu Borgir: Disney. And “Eradication Instincts Defined” is Dimmu having magical fun with the orchestra they employed for Death Cult Armageddon. The track opens like a scene from the Haunted Manson, and offers you the romantic preamble that one wants before getting hooked from within by a generous lover. Didn’t they use it in the trailer for the original Hellboy movie? Come on, be real, how many times did you get fingered while watching that?

We don’t talk enough about how epic good sex is, and how much the throes of passion deserve a soundtrack as soaring and Draculean as they feel. “Blood Hunger Doctrine” nails this, but also feels specifically appropriate for a spirited fingerblasting. The song’s sudden shifts in tone, from its cinematic orchestral moments to its eerie piano-driven interludes, are best accompanied by a quickness and nuance that few can manage with their hips alone. Extra props if the person being fingered is menstruating; god-level if the blaster like their fingers when they’re done.

Sheer, surging intensity. The instrumental closing track of Puritanical Euphoric Misanthropia is two thick fingers of symphonic overpowerment, the soundtrack to an unstoppable army advancing towards a blazing sunrise. Which is why it makes such a great accompaniment to getting pumped firmly and authoritatively by someone who’s ready to meet the song’s power and stamina. Accept nothing less than elite treatment.

How could we not include it? This is certainly the most straight-up black metal of the tracks on this list, so it should be saved only for the grimmest and most frostbitten of fingerings (preferably taking place under the Northern Lights). But there’s a sultriness to that stripped-down approach, and rather than just a merciless deluge of evil, this one affords the occasional moment of nuance. Unless the pure winter’s gale is what you want, in which case, tell your partner to BLAST AWAY!

The post The 10 Best Dimmu Borgir Songs to Get Fingerblasted To appeared first on MetalSucks.