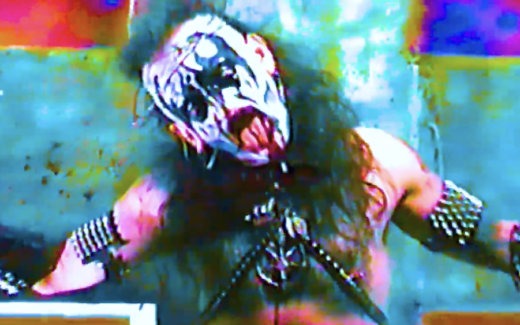 Earlier this year, we wrote about Bathe the Babe In Bat’s Blood, the killer new album by Philly vampiric black-thrashers Spiter. The record is basically what Christian fundamentalists think metal is, a blood-soaked celebration of murderous thoughts, graveyard coitus, satanic Dracula worship, and spiked bondage gear. Now, the band have released a new music video for their song “Tortured Soul,” and it contains everything our parents warned us about when it came to rock and roll music.

And here’s the thing: we do mean fucking everything. Spiter really seek to cover all Satanic Panic territories with the “Tortured Soul” video. Sex? They got a go-go-dancing devil girl shaking her thonged ass and kneading herself while sneering. Violence? Over the course of the video, frontman Dick Spider gets crucified, hangs himself, and slits his wrist as the aforementioned devil girl dances on top of his corpse, all while some dude snacks on a bat. Death? The Grim Reaper’s here, and he’s throwing the horns, and he’s really fucking stoked about it by the look on his face. Blasphemy? Well, watch all the way through until the end, but let’s just say that the final shot is a perfect climax to this entire sick, twisted metal orgy. The message here is clear: Spiter are coming, and they’re going to flap down on you in the night and try to suck your blood, and there’s a 95% chance their pants will be assless when they do it.

Check out the video below. Spiter’s Bathe the Babe In Bat’s Blood is out now on Hells Headbangers, and can be streamed wherever you get your bisexual devil-worshiping dope-fiend music.