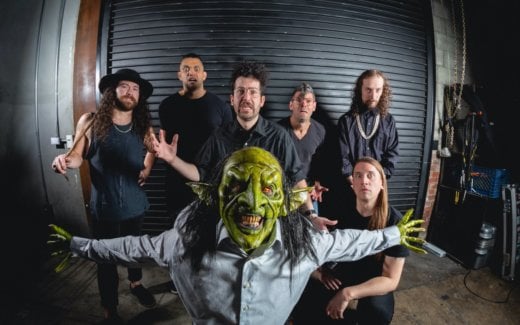 When the untimely passing of Children of Bodom frontman Alexi Laiho took place exactly two years ago today at his home in Helsinki, Finland, the metal community was left shaken to its core when it was announced days later. Known the world over for his guitar skills and ability to command a crowd at the head of COB, fans and colleagues have paid tribute in whatever ways they could.

Earlier today, Nekrogoblikon released a cover of Children of Bodom’s “Bodom Beach Terror,” from the band’s 2003 studio effort Hate Crew Deathroll. Rather than hamming it up and satirizing things like they normally do, they instead turned in a faithful adaptation of the song.

Nekrogoblikon frontman Alex ‘Metalex’ Alereza (aka Goldberg) said the band’s tribute to Laiho has to be a special one since he attributes Children of Bodom for a lot of the inspiraton for his band.

“There is no single other band or artist that I can say has had as much of a musical influence on Nekrogoblikon as Children of Bodom, and I can say with confidence that had I not been exposed to Alexi Laiho’s compositions and playing style I would be a completely different guitar player today.

Upon being collectively saddened by Alexi’s passing in the midst of the pandemic, we began revisiting the COB albums that had the greatest impact on us and decided to record a cover of “Bodom Beach Terror” off of Hate Crew Deathroll. We each recorded our parts ourselves from home and made it a point to be as faithful to the original recording as possible.

Hope you enjoy listening to this tribute as much as we enjoyed recording it, and long live the legacy of Alexi Laiho and Children of Bodom!”