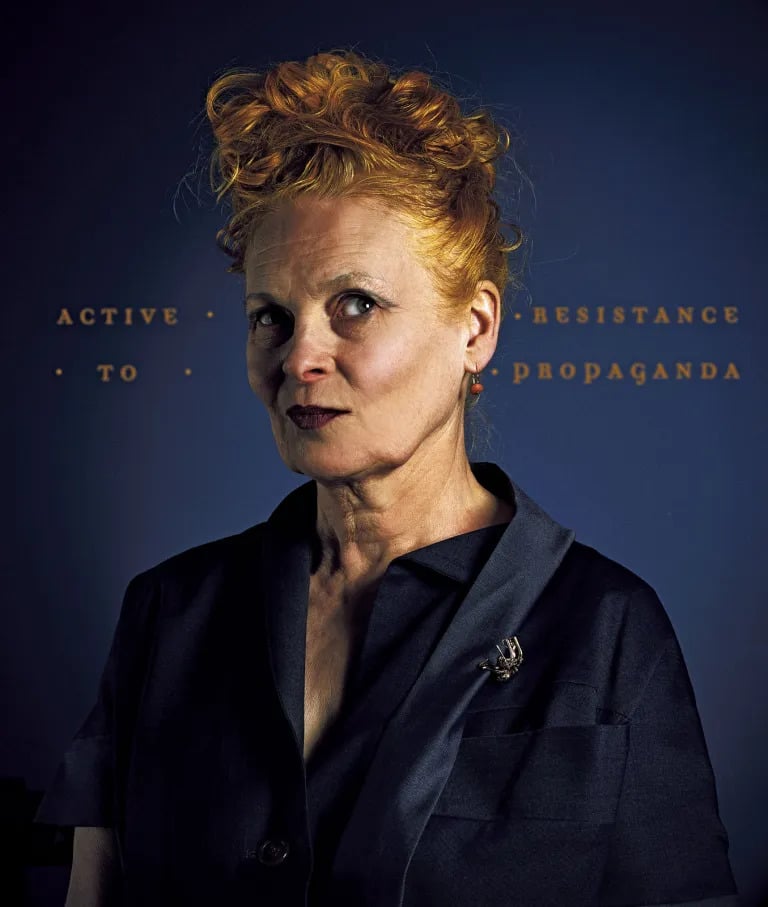 “I was messianic about punk, seeing if one could put a spoke in the system in some way.” – Vivienne Westwood

Westwood grew up working-class in Derbyshire. She briefly studied jewelry making at the Harrow Art School, but left after one term, saying: “I didn’t know how a working-class girl like me could possibly make a living in the art world.” For a short time she made a living as a teacher, creating her own jewelry designs and selling them on the side on Portobello Road. She had a brief marriage and a son Benjamin, but left this path of life after meeting Malcolm McLaren.

Westwood and McLaren moved in together and had another son, Joseph Corré. Westwood continued to teach until 1971, creating clothes of McLaren’s design on the side. When McLaren began managing the Sex Pistols, the band wore Westwood’s and McLaren’s provocative designs, and Westwood’s notoriety as a designer skyrocketed.  Her rebellious spirit led to truly memorable collections throughout her career, as she married the grunge of punk subculture with traditional feminine themes as a means to promote socio-political change.

She and McLaren also created an innovative boutique: SEX, located on Kings Road. The shop had already undergone a few incarnations since 1971 (Let It Rock; Too Fast To Live, Too Young To Die), but their distaste for the Swingin’ 60s and hippie looks was clear from the get-go. The punk style they created was based more on 1950s subculture: Teddy Boys, biker gangs, BDSM gear from forbidden magazines. Finally they just settled on one word: SEX, which became a hub for the London punk set who feasted upon their selections of fetishwear, bondage gear, leather, latex, safety pins, lace, and studs.

Their slogan? “Rubberwear for the office.’

Westwood’s and McLaren’s vision helped clothe an entire generation of late boomers ready to disrupt a tired musical, social, and political scene as it encompassed an innate understanding of the importance of fashion to music.  The Slits’ Viv Albertine wrote: “Vivienne and Malcolm use clothes to shock, irritate and provoke a reaction but also to inspire change. Mohair jumpers, knitted on big needles, so loosely that you can see all the way through them, T-shirts slashed and written on by hand, seams and labels on the outside, showing the construction of the piece; these attitudes are reflected in the music we make. It’s OK to not be perfect, to show the workings of your life and your mind in your songs and your clothes.” Westwood’s signature pearl necklace with its orb logo has remained a highly popular fashion statement since its creation in the late 1980s.  A hybrid of the Sovereign’s Orb and the rings of Saturn, it is peak Westwood: combining established iconography with something unusual – in this design’s case, outer space. Westwood’s orb logo symbolized taking tradition into the future.

Her first runway presentation, Pirates was staged in 1981. She continued to create more collections: Savage, Buffalo Girls, New Romantics and The Pagan Years. She gained further traction designing for the Sex and the City movie.

Westwood eventually expanded her boutique empire around the world, selling an increasingly varied range of merchandise, some of which promoted her many political causes such as climate change, civil rights, PETA and vegetarianism, and the Campaign for Nuclear Disarmament. Her political alliances shifted over the years due to bureaucratic frustrations, but she finally settled on the Green Party.

“I make the great claim for my manifesto that it penetrates to the root of the human predicament and offers the underlying solution. We have a choice to become more cultivated, and therefore more human; or by not choosing, to be the destructive and self-destroying animal, the victim of our own cleverness. To be or not to be…” she wrote in her manifesto, Active Resistance to Propaganda.

In 1992, Vivienne Westwood was awarded an OBE from Queen Elizabeth. At the ceremony (to the Queen’s alleged amusement), Westwood wore nothing but sheer tights with reinforced bikini top under her skirt. “I wished to show off my outfit by twirling the skirt,” Westwood reflected. “It did not occur to me that, as the photographers were practically on their knees, the result would be more glamorous than I expected.” She was given the title Dame in 2006 for “services to fashion,” and was a three-time winner of British Designer of the Year.

Westwood’s husband and creative partner, Andreas Kronthaler, said: “I will continue with Vivienne in my heart. We have been working until the end and she has given me plenty of things to get on with. Thank you darling.”

The post Fashion Designer and Punk Icon Vivienne Westwood Passes Away at 81 appeared first on Post-Punk.com.