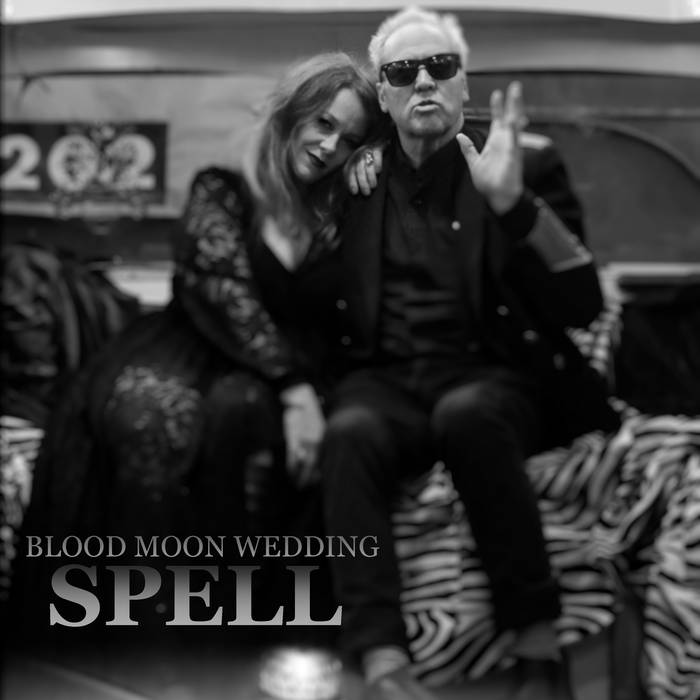 Oakland opera singer Mia Dean and English punk-rocker Steve Lake (Zounds) have joined forces once again. After several releases under their respective names, they have resurfaced as Blood Moon Wedding. The first single and video from the upcoming self-titled album, due on the 7th of April via Mobilization Recordings, is the intense “SPELL.”

The track is a mesmerizing introduction to an exciting sonic journey through a land peopled by the damaged, the fragile, and the mythic. Dean and Lake’s voices intertwine in a hypnotic call-and-response performance, reminiscent of other strangely juxtaposed duets: Anita Lane and Mick Harvey; PJ Harvey and Thom Yorke; Nancy Sinatra and Lee Hazlewood. Its repetitive chorus swells into an incantation, a prayer to the wild unknown. The Lynchian vibe underscores the vibe of the rest of the album: Blood Moon Wedding: An American Nightmare conjures a chilling narrative that details a couple’s descent into the violent, gothic underbelly of American society, as they crisscross the USA on a mission of transcendence and revenge.

“SPELL is the beginning of our story, so I have always had it in mind that we would release it as the first single,” says Lake. “It comes in rather triumphant, but also has so many interwoven, chaotic, sonic elements that set the stage for our rather wild adventure.”

The eerie DIY video feels like visions from a mystical fever dream as Dean and Lake explore the terrain of both the mortal and spirit worlds, bending time and space, while drinking in the spectacular landscapes.

“We shot most of the video at the ruins of Farleigh Hungerford Castle, and in the gorgeous, still standing, 14th century chapel on the site,” Dean explains. The rest was filmed on the shore of the San Francisco Bay. The effect is as otherworldly as the bizarre lyrics and delivery. It’s great fun to hear and watch their vocal interplay.

Mia Dean is a writer and singer for the Oakland band Antler Family. She studied classical opera and performance in San Francisco with the great Metropolitan Opera mezzo-soprano, Blanche Thebom, and abroad. She sang opera on the stages of Italy and Austria before returning to California to focus on composition and production. Mia Dean co-founded the Oakland Metro Operahouse, where she met Steve in 2017 when Zounds was headlining Manic Relapse Fest. Known primarily as a great punk and metal venue, the Oakland Metro Operahouse is also an award-winning experimental opera company for which Dean has produced many operas, including The Turn of the Screw (B.Britten), Les Enfants Terribles (P.Glass), and The Rise and Fall of the City of Mahagonny (Brecht/Weil) for which she also co-wrote an updated libretto, The Hoodslam Opera.

Steve Lake is member of the influential English alt-rock group Zounds, an English anarcho punk/post-punk band, fronted by Lake. Founded in 1977, they were originally part of the cassette culture movement, releasing material on the Fuck Off Records label. Zounds were also involved in the squatting and free festival scene.  Lake’s work is expansive and experimental. Beyond Zounds, he has produced and performed a number of spoken-word and multimedia events throughout Europe, including the Edinburgh Festival.