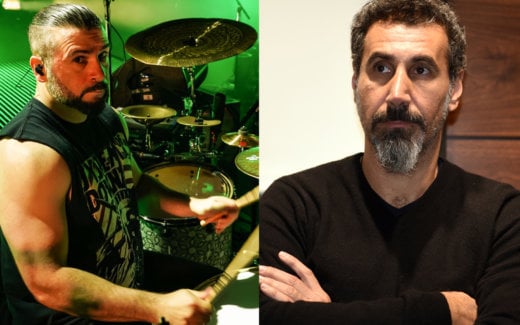 In the years following their 2005 releases Mezmerize and Hypnotize, System of a Down have left their fans waiting for a follow up record. And though the band’s gotten together for the occasional show here and there and released two songs back in 2020, it seems the band remains divided enough to keep the members from working together.

During a recent interview with the Battleline Podcast, transcribed by Blabbermouth, drummer John Dolmayan puts most of the blame on vocalist Serj Tankian.

“Serj hasn’t really wanted to be in the band for a long time. And quite frankly, we probably should have parted ways around 2006. We tried to get together multiple times to make an album, but there were certain rules set in place that made it difficult to do so and maintain the integrity of what System of a Down stood for. So we couldn’t really come together and agree. And part of that is Serj’s fault, and part of that is my fault, and Shavo’s [Odadjian, System of a Down [bassist] and Daron’s [Malakian, System of a Down guitarist] as well. But at the end of the day, if you have a majority of the band thinking one way and one person thinking the other, it’s very difficult to come together and make music thinking that person is important.”

When asked to explain his “should have parted ways in 2006 ” comment, Dolmayan said he felt the band should have moved on from Serj and continued with someone else, which just sounds wild to me considering how Tankian’s voice is System of a Down to so many.

“I think we should have moved on, and if Serj didn’t wanna be in the band at that time, we should have just moved on and done it with somebody else. But that’s what happens when you’re loyal and you really wanna make it work; you’ll put up with things that may be detrimental to the health of the band or the health of the situation. Maybe it would have been better if we moved on and got another singer for an album or two and continued to make music and brought Serj back later if he wanted to come back. That probably would have been better. But as it is, I think we wasted 15, maybe 20 years of our lives waiting.”

Dolmayan emphasized that every member of the band is important to the success of System of a Down, but pointed out that the members’ side projects were never a good as System of a Down.

And you’ll know this by listening to anybody’s side projects; they’re never quite that good compared to System. In fact, I think a lot of ’em aren’t very good at all. And when you compare that to what we do together as System, you understand why the team matters and having certain talents come together and merge matter and that magic thing captured doing that matters.”

To say Dolmayan and Tankian don’t necessarily see eye-to-eye on things may now be an understatement. Dolmayan is a vocal Donald Trump supporter, while Tankian is most certainly more left-leaning, politically speaking. This also isn’t the first time Tankian’s been blamed for the hold up. In 2018, guitarist Daron Malakian accused the singer of not wanting to record any new music due to creative and financial decisions. It was an accusation that Tankian responded to on Facebook by claiming Malakian wanted to run the band creatively, take more publishing rights, and be the only person to talk to the press.

So if you’re waiting for new System of a Down music, you’re likely going to be waiting a long, long, long time…

The post John Dolmayan: “We Probably Should Have Parted Ways [with Serj] in 2006” appeared first on MetalSucks.