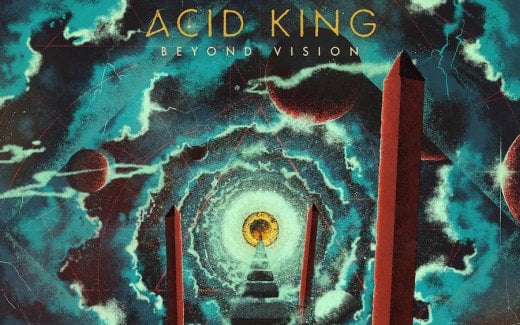 Stoner/heavy psych royalty Acid King are back with “Destination Psych/Beyond Vision,” their first new original music since 2015’s Middle of Nowhere, Center of Everywhere full-length. It’s part of a longer full-length called Beyond Vision, which is due for a March 24 release on Blues Funeral, one of the hotter psych labels lately.

Guitarist and vocalist Lorie S. spoke about the new album:

“The band was never really that psychedelic, but this is definitely more trippy because we’ve got keyboards and synthesizers. That’s something we’ve never had before on Acid King records. The songs really have no beginning or end — they all just flow into each other. It’s meant to be listened to as one piece. The whole point was to have the listener feel like they’re on a journey. If you put headphones on, it’ll take you to whatever places you’d like to go to.”

“The record is based on the journey of life. Jason [Landrian] and I were having these heavy pandemic conversations at the practice space for two years, talking about all the stuff you go through being in bands, touring, your relationships in life, all that stuff. You think this trip is supposed to go one way, but it goes in very different ways that you can never imagine.”

2023 marks 30 years of Acid King and what a long, strange trip it’s been for the band thus far in their career. Though their output has been sporadic since their phenomenal and criminally-underrated debut, Zoroaster, Acid King’s quality has never wavered and the meandering psychedelia of “Destination Psych/Beyond Vision” gives me no reason to worry that it’s about to change on LP five.

You can pre-order the album now in the US and Europe.