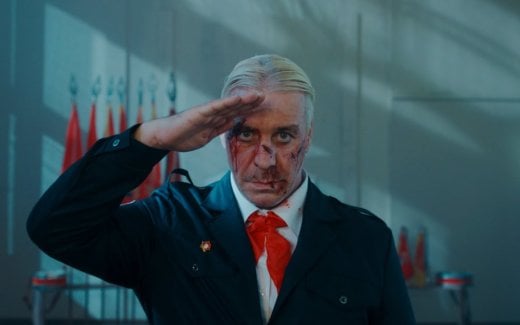 German singer and fan of big titties Till Lindemann has been around for a while, seen a lot of things, been a lot of places. The dude fronts the biggest German metal band of all time. So in a bid to celebrate his life and success, an artist named Roxxy erected a statue in his honor in the city of Rostock. According to an Instagram post by the artist herself, the statue was placed in front of the exact home Till lived in growing up.

What a nice gesture.

…Or rather, it was a nice gesture, as it took less than 24 hours for some arschloch (asshole) to steal the statue. I mean really, who the fuck steals a statue anyway?!

According to German news outlet NDR, the authorities are asking for any information regarding the theft. They believe someone must have seen the incident taking place or someone walking away with a statue, since it’s hard to walk down the street with a statue under your jacket.

This apparently isn’t the first time a statue’s been stolen in Rostock. Back in 2019, the same artist put up a statue of Rostock-born rapper Marteria, but according to Nordkurier, that piece of art was also stolen two days later. Unlike the Till statue though, that one was broken off its base, with only the feet left on its original platform.

Sounds like someone’s got a thing for statues and they’re not afraid to be an asshole about it.

The post A Statue of Rammstein Frontman Till Lindemann Was Stolen Roughly a Day After It Was Erected to Celebrate His 60th Birthday appeared first on MetalSucks.