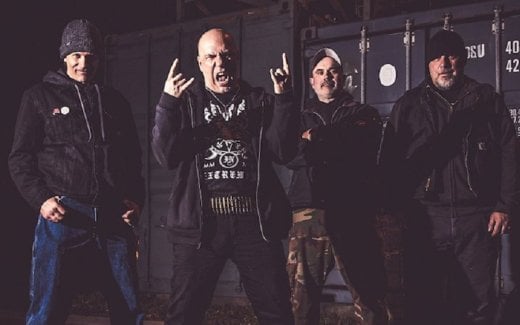 The maple syrup container that is the Canadian metal scene never seems to run dry. So what do we have coming out of the tap this week? In regards to classification, saying a band is purely death metal or black metal may undermine their intentions. It’s safe to say, however, that the bands represented here are extreme in one form or another.

We have mixed the known with the unknown in this list to give this stack of pancakes some flavor. Brutal death metal, progressive death metal, slam, grind and noise – these are 11 extreme Canadian bands you might not be aware of…

From parts unknown (somewhere in Canada), Yagami is another anime-themed brutal death metal project to add to your playlist of Dehumanizing Itatrain Worship, Cheerleader Concubine and Human Instrumentality Project. Yagami is one of the many projects of musician Richard Engelhardt (Ashed, EVA-01 and the Trailer Park Boys-themed project RandyXLahey) and with this project, the aesthetic of tentacles ravaging helpless Sailor scouts is given an especially brutal soundtrack – being one of the most savage bands you’ll hear within this movement.

Vancouver’s Assimilation started around 2011 with the former name of Ceaseless Discharge. Now, Assimilation might be a more generic name, though generic could hardly be used to describe their sound. This is ripping, thrashing death metal sounding akin to a group of raptors pouncing on a big, fat slab of living, breathing Canadian bacon. Their second album, Tainting the Purity (Reaper Metal Productions) is out now. Get Assimilated…or tainted.

The events on South Mountain led to the discovery of one of the most bizarre crimes in the annals of Canadian history, the Goler clan. Golers take their name from the infamous account in Nova Scotia of a rural family known for poverty and inbreeding. Thus, this Vancouver-based thrash/crossover act dubbed themselves the “Inbred Militia” with their songs and albums giving the listener a rundown of those backwoods’ events. The band, like infamous rural families, has been quiet for a while, but the buzz is back as they gear up to release Die Now, Pay Later.

Abjection is a monstrosity culled from an abscess in space and time and featuring members from Wake, The Weir, Dead Again, and Origami Swan. Members culled from different bands of varying genres is one thing, but Abjection also has multicultural stitching, with members reigning from Russia, Australia and Canada. What has been harvested from the years in the metal field and varying outlooks and musical philosophies of the members is a progressive death metal tumour eager to take up space in listeners’ brains with Malignant Deviation, their debut EP.

Abjection is a monstrosity culled from an abscess in space and time and featuring members from Wake, The Weir, Dead Again, and Origami Swan. Members culled from different bands of varying genres is one thing, but Abjection also has multicultural stitching, with members reigning from Russia, Australia and Canada. What has been harvested from the years in the metal field and varying outlooks and musical philosophies of the members is a progressive death metal tumour eager to take up space in listeners’ brains with Malignant Deviation, their debut EP.

Since 2005, black and death metal fans in Edmonton the surrounding cities have frequented concerts by local arch fiends Begrime Exemious to get their fix of damnation. The band has been consistent and prolific since the start, teaming up with Dark Descent Records to release 2010’s Impending Funeral of Man and the following albums. 2022 saw the release of Rotting in the Aftermath, another bullet on the belt for Begrime with songs like the vicious “Hell’s Embrace.”

Canadian label Profound Lore Records is home to a number of avant garde and esoteric artists. Black Death Cult fits the mold by creating black metal outside of the expected trappings of the genre. Well, imagine you opened the Necronomicon, read a random passage and whatever demons came out started jamming on the instruments in your basement. That is a close description of what Black Death Cult sounds like. Dressed in Skinny Puppy-esque garb, the band vibes on the nightmarish.

From one cult to another. This band of punk/death/grinders hail from Toronto and with their 2022 offering Death to All Tyrants, have quickly made an impact on the scene. The album is nine tracks of mini-car crashes. Short, one minute bursts of violence that contain hooks and solos while not sounding forced or generic – hard to achieve but this cult has the formula, perhaps learned in one of those Eyes Wide Shut parties.

Masked and full of bane, Calgary’s Black Pestilence are a snarling, froth-mouthed band of heathens who mix black metal with influences from the punk and noise genres. The band came onto the scene with 2009’s Vice and have been shattering traditions since. They recently finished a European tour with doom comrades Bloated Pig and promise a follow-up to 2020’s godless offering Hail the Flesh in the upcoming year.

Quebec’s Art of Gore perform brutal death metal and became familiar to the extreme music world at large by being part of the Sick Dog Fest online festival in which 80 bands from different countries streamed performances during the COVID era. So far, Art of Gore just has a single EP out, released by HSP Productions. As with some brutal bands, the live show really brings the music to life, much like that pile of guts in Dead Alive that had a life of its own. Get a ticket for this exhibition.

Edmonton is home to one beast of a man who has put his clubs and rocks to good use, creating the “caveman slam” band Necromonger. The project has but one full-length release, heaved out on October 31, 2022. On this album, Unspeakable Acts of an Indifferent God, all of the instruments and all of the mongering was done by Justin Vanderhoek. It’s not impossible to put something like this together on your own – see Putrid Pile or stuff by Larry Wang for good examples of extreme one-man bands, but it is nevertheless admirable. Long live caveman slam.

Okay, try to suggest this band to someone without laughing when saying the name. From Lethbridge, Albera, Necrofuckphilia are a slam/goregrind band who made their worldwide mark by being a part of the Girls, Guts, Ganja compilation album from 2018 featuring Gorepot, Bong Rips for Jesus and Syphilic Diarrhea. The band, like Gorepot, mixes humorous samples with crunchy blasts and squeals, meaning that there is more fun to the band than just saying their name.