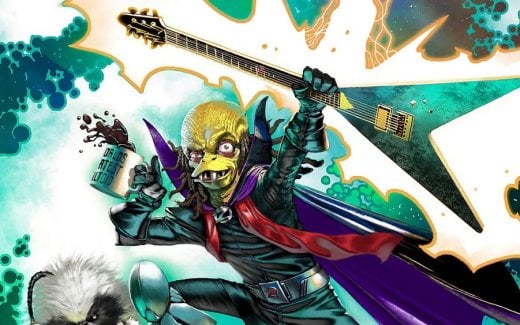 Roughly 16 years ago, the world was introduced to a guitar slinging, coffee swilling, multi-dimensional terror known as Ziltoid the Omniscient. His quirks, his story, and his quest for dominance was the brainchild of heavy metal madman and seemingly all around nice dude, Devin Townsend.

Now, after two albums and some hilarious YouTube shorts, Ziltoid is gracing an entirely different form of media — comic books. The first issue of Ziltoid the Omniscient will be printed on April 12, with issues to make their way to fans shortly afterward. Published by Opus, the comic is currently available on the Incendium website, offering fans a shot at owning a copy of the limited first print run of the first issue.

Written by Lars Kenseth and edited by Denton Tipton, the first issue in the series also features art by Andy Kuhn, with color work by David Garcia Cruz and letters done by Jacob Bascle.

As you can tell from the preview images below, it’s looking like we’re gonna get a bit of Ziltoid’s origin story. According to the story description, Ziltoid is tasked with keeping the coffee flowing for the Ziltoidians otherwise space-time will collapse. Unfortunately, as you already know, Earth is the only place coffee exists in the universe, so the ensuing 30 pages are chock full o’ wild stories.

The first print edition is limited to 2,217 copies, with each copy being individually numbered and given a special foil treatment. The cover will be printed in card stock and the pages will have a glossy finish. All of that can be yours for $19.99.

The post A Ziltoid Comic Series is Coming Next Month, So Get Your Ultimate Cup of Coffee Ready appeared first on MetalSucks.