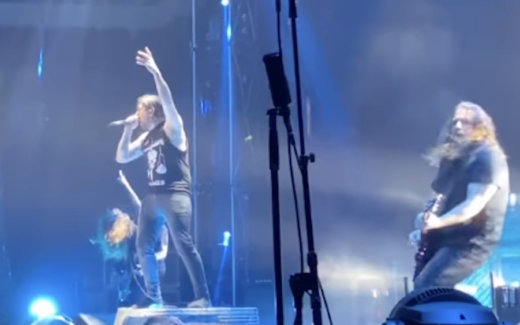 Earlier this week, we posted that  Lamb of God frontman Randy Blythe had tested positive for COVID, and would have to miss the band’s Grand Rapids stop with Megadeth, Trivium, and In Flames. Mark Hunter of Ohio metalcore forefathers Chimaira took the stage in his stead, which was pretty fucking cool. Then, when the band were forced to cancel their Fort Wayne, Indiana, show entirely, fans wondered whether or not they planned to continue the tour — until it was revealed that Fit For An Autopsy frontman Joe Badolato would step in for the band’s Green Bay show! Now, you can watch footage of that performance below.

As you can see below, fffffuck, dude, Joe sounds awesome at the front of Lamb of God! I know we all assumed this would be a killer show, but damn if the dude doesn’t both sound a ton like Randy and bring his own unique flavor to these songs. On top of that, Lamb of God’s ability to just summon prominent frontmen like they’re goddamn Pokémon is fucking rad. Who’s next? Spencer from Periphery, I choose you!

Anyway, check out the footage below via Matt Heafy’s Instagram. Fans should get tickets to one of the remaining dates on Lamb of God’s current tour with Megadeth, Trivium, and In Flames below:

The post Watch: Fit For An Autopsy’s Joe Badolato Fronts Lamb of God In Green Bay appeared first on MetalSucks.