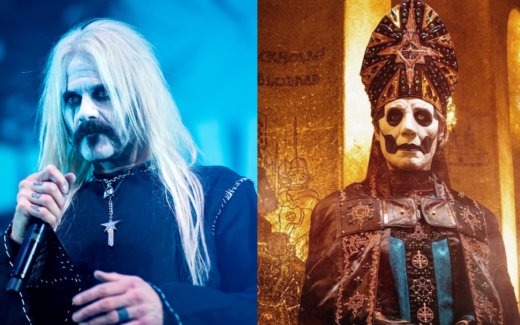 People who hate on Swedish occult megastars Ghost often claim that the band is simply a rip-off of other, heavier acts, primarily those who also wear facepaint. A common comparison made is to the music of Mercyful Fate, though Fate frontman King Diamond has made it clear that he doesn’t believe that to be the case. Now, in a new interview, another Swedish musician has said that he thinks Ghost’s Tobias Forge bit off his act — kind of.

The musician in question is Snowy Shaw, former drummer of King Diamond, Mercyful Fate, Theatres de Vampires, and the primary songwriter of Dream Evil. He was also the frontman of Swedish goth-metallers Notre Dame back in the day, whose spooky aesthetic is somewhat similar to that of Ghost, and who also inhabited their own self-made world.

During an interview with The Metal Voice, Shaw was asked if he felt that Ghost “took his idea and ran with it.” His answer, via Ultimate Guitar:

“You’re certainly not the first one to ask about that. Gus G, the guitar player, he was like, ‘What the fuck? This band is getting so popular, and they’re doing what you did with Notre Dame way back.’ [I said,] ‘Okay, if you think so.’ But there are touching grounds, I suppose.”

However, Shaw then smartly pivots, explaining that Ghost are doing what so many artists like them do, which is borrow the aspects of previous bands before them:

“But it all stems from let’s say, Arthur Brown, starting out like with corpse paint and all that. And then… it was Alice Cooper, on to Kiss, on to… this theatrical thing. So, we all sort of take bits and pieces, and copy, and get inspired, and do our own version of it, like me.

“Without Alice Cooper, there wouldn’t be any Mötley Crüe; W.A.S.P. is inspired by Kiss and all that. King Diamond, I mean, he’s also a result of [Alice Cooper’s 1975 album] ‘Welcome to My Nightmare’ – ‘Wow, I want to have that kind of theatrical show.’ So I wouldn’t say that Ghost has ripped me off, but they have certainly managed to make it big. Which I didn’t.”

There you go — Snowy Shaw ain’t mad, but he also maybe sorta kinda thinks Ghost bit off his shtick.

Check out the full interview below: