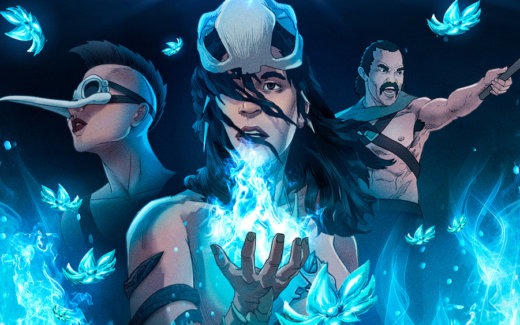 If you’re a fan of metal, rock, or outsider art, you’ve undoubtedly watched Heavy Metal, the 1981 animated movie based on the boob-centric comics magazine. The film is packed with all sorts of classic metal imagery – apocalyptic cities, warriors atop prehistoric beasts, space coke, skeleton zombies, and, of course, ample bare bosoms – but its plot is weak, and it’s obviously just a mess of cool animation with no real story to speak of. Which is why The Spine of Night, the 2021 animated film that’s just hit horror streaming service Shudder, is such an appropriate heir to the movie’s throne: this is Heavy Metal for the doom metal era, a collection of mystical images and epic concepts that don’t really form a compelling plot.

The premise of The Spine of Night is 100% a rip-off of Heavy Metal’s running theme, only for fans who know what weed strain they like. Instead of Heavy Metal’s green glowing rock, the rabbit’s foot here is a blue glowing flower, which gives one all manner of blue-themed abilities while also showing them the totality of cosmic existence. Our story follows a nude, zaftig swamp witch named Tzod (voiced by Lucy Lawless) who unwittingly puts the flower into the hands of a power-hungry scholar, who then uses it for ill over the centuries. One by one, many other coolly-designed fantasy characters join the fray – the evil priest of a literary cult, an elite team of plague doctor-masked flying assassins, and an eternal guardian of the blue flower inside of a giant skull. Other than that, it’s a whole lot of sword-based ultra-violence.

Which is why The Spine of Night is a cool watch if you’re baked and feel like it. There’s all sorts of limb-hacking, gut-ripping, and face-melting to be seen in the film, along with some epic war machines and ancient citadels. Meanwhile, the film’s themes of environmental justice in the face of cultural exploitation come off as super relevant today. From front to back, this is like the film version of a High On Fire video, and who doesn’t love a High On Fire video? Meanwhile, the movie’s motion-capture animation style hearkens back to Frank Frazetta’s 1983 film Fire and Ice, while the drawings themselves smack of meme and Flash animation. It feels sprawling, modern, and perfect along with a bong rip.

That said, the animation style is in many ways the film’s undoing. Because The Spine of Night relies on realistic movements, the majority of the scenes involve a lot of people staring and talking. Massive moments are glossed over – we keep finding eras in ruin, but don’t always get to see the ruin. One scene opens with Tzod narrating something like, “He laid waste to the entire city, then marched on the rest of the world…” But where’s the laying waste? Why only this part of the march? Meanwhile, everyone’s costume feels like a reference to another famous movie, like Tzod’s Army of Darkness headgear to soldier Mongrel’s Zardoz straps to everything from Heavy Metal. This is more like a few stoned metalheads came up with a movie in their basement – it’s got cool ideas, but never goes anywhere, and sometimes feels a little on the nose.

If you’re interested in the kind of movie that would look awesome played behind a Sleep show, then yeah, definitely watch The Spine of Night. Hell, watch it anyway if you have a couple of hours and a really solid Indica hybrid — there’s a lot to see here. But if you’re looking for a great fantasy film, this just ain’t it. We’d tell you to watch Heavy Metal instead, but that’d be foolish, because both films have the exact same problem: fun to look at, not much there.

The Spine of Night is streaming now on Shudder.

The post Review: <em>The Spine of Night</em> Features Some Awesome Doom Metal Imagery, But That’s All It’s Got appeared first on MetalSucks.