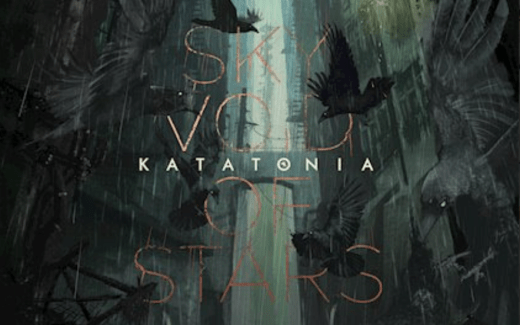 Sweden’s Katatonia is back with another refreshing otherworldly wonder — their 12th studio album, Sky Void of Stars. There is truly no other band like Katatonia. Founded in 1991, the band is defined by its radical individuality and constant state of evolution. Sky Void of Stars proves that Katatonia’s reputation is well-earned.

Sky Void of Stars takes you on an unforgettable journey to the depths of melancholia and far beyond. This is, of course, a very dark album, but it shines at times with the brilliance of a supernova. Each song is self-contained and wholly unique, with all 11 tracks still stringing together seamlessly. The unreal sense of atmosphere will keep you hooked all the way through.

This record is like a blissfully vivid hallucination. As always, Katatonia’s poetic lyrics are in a league of their own. The band mines trippy images from such a deep place in the subconscious that there’s nothing predictable or tedious about Sky Void of Stars.

Compared to their body of work, Katatonia’s Sky Void of Stars feels both nostalgic and futuristic. For a little over 50 minutes, the album entices listeners with youthful energy, yet a drab sense of defeatism hovers over it like a noxious gas. To that end, this genre-bending release both arouses and sedates.

Although Sky Void of Stars certainly removes you from your comfort zone, it will help you find your chill mode. Not only are the songs earworms, but they also show off Katatonia’s highly skilled musicianship. After all, the material was composed by Katatonia’s co-founder, Jonas Renkse. His timeless and pure vocals suit the music perfectly. It is worth noting that Renkse’s fellow co-founder, Anders Nyström, remains in the lineup and can be heard on guitar with Roger Öjersson.

It would be absurd to single out any of Sky Void of Stars’ amazing songs as being better than the others. Yet, we must admit that “Opaline” and “Atrium” are especially catchy. There is absolutely no way you can survive the former without dancing. “Birds” is bound to prove a crowd pleaser as well. “Impermanence” is a bittersweet gem that is sure to burrow its way into your heart. Listen for the title of the album title in the song “Author.”

The verdict is that simple: although Katatonia has conditioned us to expect the universe, the ridiculously cinematic Sky Void of Stars still blew us away with its inventiveness. This totally bewitching effort deserves a place in your record collection.

The post Review: Katatonia’s Sky Void of Stars is an ‘Otherworldly Wonder’ appeared first on MetalSucks.