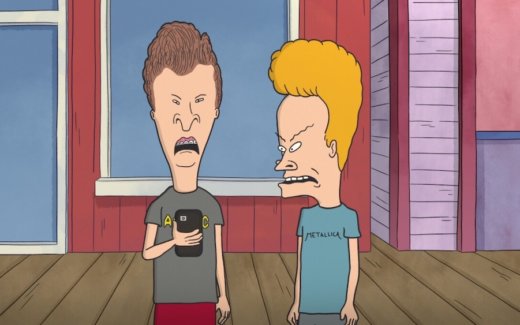 While I’m a fan of art in all its many forms, the lowbrow will always be my home. Sophisticated art is beautiful and meaningful, but the minute someone tries to tell me about how sophisticated it is, I want out. Which is why I was stoked to learn that another Beavis and Butt-Head movie was on the way — though when I saw smartphones and wormholes in the preview, I worried Paramount+ would go too hard in the conceptual paint. Thankfully, they didn’t, and Beavis and Butt-Head Do The Universe is a riot that made me laugh my ass off from beginning to end.

The plot? Sort of the same as the first one, but Rick and Morty. Beavis and Butt-Head’s idiocy gets pitied and misunderstood as genius by the stupid world around them, and they end up in space believing they’re going to score with a woman way out of their league. After getting sucked into a black hole, the two are spat out into 2022, where they’re chased by government officials who believe them to be the greatest threat to mankind that the world has ever known. In the meantime, they suck down nachos, misunderstand basic directions, have bouts of bunghole-themed TP frenzy, and laugh.

And you know what? The characters get a little deeper – not much, but a little. We get to know Butt-Head’s utter contempt for Beavis a little better. We get to see that Beavis is the emotional member of the duo (also, Beavis is his last name!). Mike Judge and Co. don’t JUST give fans a long episode of Beavis and Butt-Head – and don’t worry, that’s basically what this is – but also let us know that the more time we spend with these two morons, the more we learn about them. All that said, do they ever share a loving embrace, or cry about their parents? Nope. They weakly beat each other up and say, “BOI-YOI-YOING!” Because even if this movie is slightly interesting, the show’s heart is still there. And that heart is a boner.

Trying to find a flaw with this movie feels as stupid as its protagonists. If you were hoping for some sort of revelatory reinvention of heavy metal’s favorite fictional characters, then you’re as dumb as they are, too. Beavis and Butt-Head Do The Universe reminds us that even if life gets complicated and the world seems like a mess, watching two snickering metalhead idiots wander around screwing things up is still comedy gold. Hey. I said ‘screw.’ Aheh. Aheheheheh. Aheheheheheheheheheh.

Beavis and Butt-Head Do The Universe is streaming now at Paramount+.

The post Review: <em>Beavis and Butt-Head Do The Universe</em> Made Me Cackle Like a Goon The Entire Time appeared first on MetalSucks.