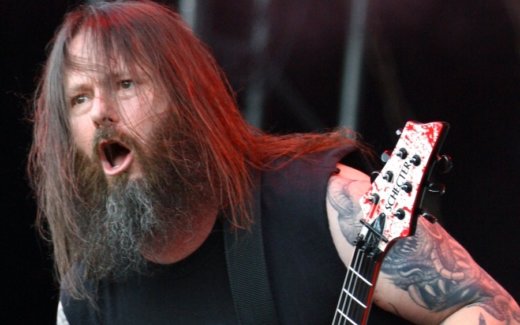 Guitarist Gary Holt recently gave an interview in the latest issue of Guitar World magazine—transcribed on Ultimate Guitar—where he discussed his time in Slayer and new music from his primary band, Exodus.

When asked if he misses playing in Slayer, who called it quits for good in 2019, he replied that he does, for more reasons than just the songs.

“Yeah, man. I’ve been friends with those guys since we were kids. And, I had one job in Slayer and one job only. Go out, play killer, bang your head and play a little bit of a guitar hero role. One thing I was shocked with was how many Slayer solos there are. There are songs that I played three solos in and at one point I’d be like, ‘Alright, I’m just going to go shred and play this one behind my head ’cause I’m out of ideas.’ [Laughs] But yeah, it was fun and relatively easy. I wear a lot more hats in Exodus and have a lot more responsibility. Fortunately, I love it — but it’s not always easy.”

He was then asked by the interviewer how he feels about guitarist Kerry King’s comments from last October that Slayer “quit too early.”

“Did the band stop too soon? That’s for them to decide. I know that’s how Kerry feels. Maybe [bassist and vocalist] Tom [Araya] doesn’t agree. I think the band had a lot more music in them, but you know what they say. It’s better to go out too soon than too late. The band went out firing on four cylinders. Better to do that than milk it for a few more years when everybody knows you’re milking it. That would tarnish the legacy of the band. This way they went out in peak form. Maybe that’s best.”

Holt joined Slayer as a fill-in for the late Jeff Hanneman in 2011, when Hanneman was battling necrotizing fasciitis. When Hanneman died in 2013, Holt stepped up as a full-time member until Slayer hung up their boots at the end of the decade, playing on 2015’s Repentless.

This response is a slight change in tone from Holt’s comments less than a year ago, in which he openly agreed with King that Slayer quit too early.

By taking on Slayer’s heavy touring schedule, Holt put Exodus on the back burner, taking a seven year gap between 2014’s Blood In Blood Out and 2021’s Persona Non Grata. Last year, he told Guitar.com that there would not be another seven-year gap between albums.

The post Gary Holt on Slayer Calling It Quits: “They Went Out In Peak Form — Maybe That’s For The Best” appeared first on MetalSucks.