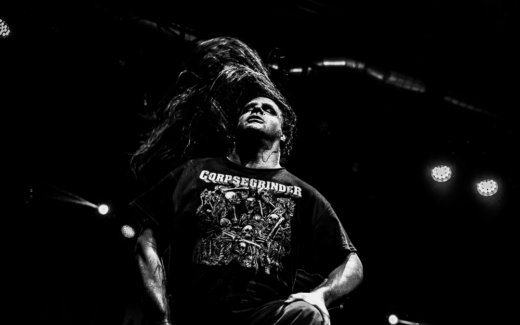 The kick-off for the concluding night of Decibel’s Metal & Beer Festival has a line outside spanning about 400 heads deep. As the clock strikes for doors, it’s as bustling an environment as you might imagine, with patrons excited to get in on the continued beer tastings. A discerning attendee can spot bassist Greg Weeks of The Red Chord stepping out from the depths of backstage and interrogating select members of the line as they get corralled into a shakedown for the onsite media crew.

With brew reps, vendors, bands, and venue staff all set up, ready for the evening’s carnage, the event wastes no time in getting concertgoers amped to bleed their souls out.

Laying waste right off the start, Deathevokation provide an ethereal cultivation of classic death metal, which sets the mood for the evening. Drawing more thralls under their control, the band attract early patrons unsuspecting of the entrapment they’re about to fall into. They quickly display the tools of empowerment, destroying the crowd with wave after wave of anguish and pain.

A pummeling of the senses becomes ever present as Sanguisugabogg serve up pornographic mayhem to the now-packed out room. Frenzied concertgoers fight back against the attack admirably, sonically violated and driven out of their minds. Those in this pit of disgust pile atop of one another to get back at what they’re all violently experiencing.

East coast grind legends Full of Hell are enveloped in the torture of themselves, and are certainly not against with showing their fans exactly what that means. The room has no chance of dodging the explosive act that is the band’s set. The quartet spew out a venomous sermon that only leaves audience members crawling back for more. Their speed and uncertainty is unmatched, backed by a litany of riffs and agonizing percussion.

Clients is a monument of metal, displayed here in full by The Red Chord. What seemed like an eternity building up to such a pinnacle moment of this weekend comes to fruition when this genre fixture comes out of hibernation. Exasperated, the crowd let out a burst of approval for what was about to ensue. Stoked with maximum effect, the highest flame of the night is lit under every stagnant ass in attendance. It’s time to learn the hard way.

After that, a portion of patrons remain as dedicated as ever, chanting along one last time with classic thrashers Nuclear Assault. Many put in their first mosh of the night, creating this sea of bodies that amasses for the sickness these lads scream. With the entire Game Over album on display, this possible final U.S. performance by these speed demons is incredible. The show ends with a heartfelt bow of appreciation for the energy and a thank you to all fans over the years from Dan Lilker, met in return with an even louder crash of cheers.

The first strike of the cymbal in Cannibal Corpse‘s set sends Corpsegrinder’s head into an uncontrolled whirl of destruction. Getting too close only means a collision is imminent, with the likes of our certain dismemberment to follow. Not even halfway through the first song, I can see the script written on the faces of security as they radio in for backup. Hell, even I stepped in to help out with a few folks getting lobbed into their body bags. Defiant and steadfast, the band repeatedly bats up without a single sign of relinquishing their rampage.