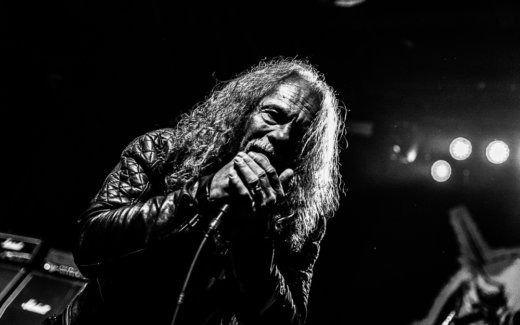 For more of Drew Nesbitt’s photography, check out his Instagram.

It’s the first true night of the fest, and anticipation for the event that’s about to unfold is written on the familiar faces of those staff members who were present at the previous evening’s banger of a kick-off party. Outside, a more-then-expected crowd can be seen through the iron gates, and soon, a flash-flood of metalheads rips through the venue to embark on a full tasting of all the breweries present here.

But enough of that – here’s a finer look at the evening’s entertainment:

Opening act The Silver come in with a somber tone under the spell of a black metal gaze. The band’s music is a grandiose ride, with ample doses of beauty strewn underneath, in between, and above all facets of their almost relentless pursuit of guitar leads.

It becomes clear how Craven Idol’s set is going to pan out as the band’s heavy soloing and powerful riffing sends the crowd into an uncontrollable frenzy behind the barricade. This is my first Philly shoot, along with my first time dodging the city’s crowd surfers, and one by one, as the grooves start to pick up speed, so do the bodies. A constant ride of the cymbal, backed by a thrum of the bass kick, kept the energy in overdrive. During their thrasher moments, all string-players on the stage seemed to have a clear connection, performing in perfect unison.

The set that Derketa give this crowd is probably one of the most stone-cold presentations I’ve seen in recent years. The band’s ice storm of guitars, mixed with the low roll of vocals, spells out a true collapse of mankind, with cymbal chimes that forecast an end to life slicing the audience’s eardrums in half.

In case you didn’t know, Soul Glo are absolutely balls nuts. No part of the stage is off-limits to a physical fight with their inner demons, from the frontman-led control box, to the guitarist going instantly apeshit, to the bassist locked in with the beat throne. The insane energy doesn’t only increase as the set goes on, but clears out basically half the standing space on the floor in a reinstatement of the pit. These hometown hardcore heroes make it clear that people should be colliding with one another, especially when “Back on my Bullshit” gets announced. All the while, vocalist Pierce Jordan takes initiative by joining the sea of hands thrown up at him in adoration.

Sci-fi thrashers Voivod make their way onstage to a crowd enthusiastically chanting their name. The band waste no time kicking up solar winds to fill their space-sails across the void this room has opened up throughout the evening. There’s a back-and-forth interplay between the captain’s helm up on the stage and the frantic crew for hire behind the barricade. The calls for more come crashing just as hard as the sonic asteroid belt through which the whole venue seems to be zipping.

Tonight’s set by Wolves In The Throne Room focuses on their 2007 album Two Hunters, and is one of the showcases throughout the weekend’s festivities where an album is played in its entirety. The Pacific Northwestern black metallers perform through the spectrum of a darkened forest, engulfed in the maw of treacherous fog. With singer Jessika Kenney joining the quartet to provide her vocal expertise in a spectral guidance to the heart of the wood, the band leave its viewers unmoored in a haze of blistering speed and gallops.

As Candlemass drummer Jan Lindh walks onto the stage, hoisting the symbol of the beast as he takes his throne, a roar shakes the room. The night has become a circus of celebration at this point. String players assume their positions and strum out the beginnings of what everyone here is waiting for. Vocalist Johan Längqvist joins the fray soon after, resulting in a second cascade of the crowd’s appreciation. Then, as the blood ritual starts, the whole venue erupts in a terrifying display of worship. Shoulder to shoulder, arm to arm, horns to horns – the entirety of the set is a spectacle of flesh, sweat, and unholy doom.