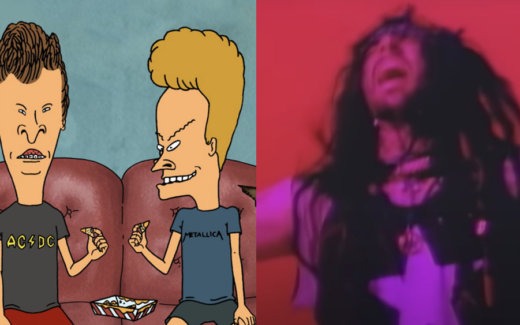 Back in February, it was revealed that Paramount+ would be hosting a new Beavis and Butt-Head movie, a new Beavis and Butt-Head show, AND the complete original series, remastered. When we heard the news, our first thought was: will the remastered episodes include the classic music videos? We love Beavis and Butt-Head, but a huge part of the original show’s appeal was watching them rip on or rock out to bands like Metallica and Pantera. But now, fat old pieces of shit like me can breathe an adenoidal sigh of relief, because according to Consequence of Sound, the remastered episodes will include all of the original music videos.

This might not seem like a huge deal to some, but for us it’s massive. Some of the funniest moments in Beavis and Butt-Head were voice actor Mike Judge’s improvised criticisms of bands like KISS and AC/DC. But it’s not all negative — the band also made the careers of acts like White Zombie, so one can also relive some of ’90s rock and metal’s success stories (plus Yanni).

Meanwhile, the duo’s new movie, Beavis and Butt-Head Do The Universe, drops June 23rd on Paramount+, with the following synopsis:

“In perhaps the dumbest space movie ever made, Beavis and Butt-Head are sentenced to Space Camp by a ‘creative’ judge in 1998. Their obsession with a docking simulator (huh huh) leads to a trip on the Space Shuttle, with predictably disastrous results. After going through a black hole, they reemerge in our time, where they look for love, misuse iPhones, and are hunted by the Deep State. Spoiler: They don’t score.”

Check out the trailer below, and get ready to have your uncles and metalhead friends quote a bunch of old music video jokes at you with the eventual release of the remastered Beavis and Butt-Head series.

The post Paramount+’s Remastered <em>Beavis and Butt-Head</em> Episodes Will Include All the Music Videos appeared first on MetalSucks.