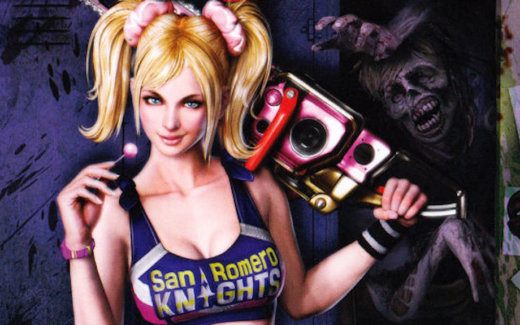 Man, it seems like right now, all of the trashy, ultraviolent video games from my youth are getting their big spotlight moments. First, we find out that Peacock is making a Twisted Metal show with Will Arnett playing Sweet Tooth. Then we learn that there’s a Duke Nukem movie in the works from the people who made Cobra Kai. Now, it’s been revealed that Lollipop Chainsaw, the 2012 game about a bubbly cheerleader who brutally murders zombies, is getting a remake.

For those of you who never played the game or just have too much going on to remember, Lollipop Chainsaw is the story of Juliet Starling, a Barbie-like teenager who’s about to introduce her boyfriend to her family when a zombie outbreak takes over her hometown of San Romero. But it’s okay, because Juliet comes from a long line of zombie hunters, and with the help of her magically-reanimated boyfriend’s severed head, she takes on a horde of the undead, including five intelligent musically-themed zombies that include a funky keytarist, a punk rock singer, and a Viking heavy metal guitarist.

While this all sounds very schlocky, it should be noted that the original game included James Gunn, director of Guardians of the Galaxy, The Suicide Squad, Peacemaker and Slither, as its co-writer and developer. So while it’s definitely not The Last of Us, the game does have a certain pedigree to it.

Now, according to Bloody Disgusting, the game’s remake is set to be released in 2023. Here’s the official statement from Dragami Games president and CEO Yashimi Yasuda:

“14 years have passed since I started the Lollipop Chainsaw project.

“Lollipop Chainsaw was born as a result of Suda51 discussing creating a new game with me. I saw great potential in Grasshopper Manufacture’s proposal, and just one month after Kadokawa Games was founded in April 2009, we started the development project on Lollipop Chainsaw, in May 2009.

“As Suda-san was very busy handling development on other projects at the time, I served as director and producer, creating a joint development team consisting of staff from Grasshopper Manufacture and Kadokawa Games, overseeing development directly. Suda-san looked over the game design and supervised the project as an executive producer.

“In January 2010, the aid of a friend of mine working at Warner Bros. led to us successfully grasping a chance with the Warner Bros. greenlight committee, and Warner Bros. thus becoming the publisher for the game in all regions outside of Asia. Furthermore, a Warner Bros. senior manager suggested that we have the game’s script rewritten, and that we leave it to film director James Gunn, which we gladly agreed to.

“All of this good fortune resulted in Lollipop Chainsaw, which released in June 2012, being loved by many players all over the world, selling over a million units worldwide.

“Unfortunately, various factors resulted in things making it so that fans can no longer easily play Lollipop Chainsaw, and it has been some time since players have not been able to access the game on current consoles.

“We, the original development staff on Lollipop Chainsaw, think of the game as very precious to us, and did not want to leave it in limbo, where players who want to play it cannot. As such, we purchased the Lollipop Chainsaw intellectual property from Kadokawa Games, and decided to develop a remake. We have already contacted Warner Bros. about development, and are being supported by them in this endeavor.

“One thing that we have to tell fans of the original game is that even though the original staff are working on the remake, there will be elements that are different from the original. For instance, the original game had 16 licensed songs used in the soundtrack, but it is unfortunately difficult for us to implement all of them this time. As a result, aside from a few licensed tracks, the soundtrack will consist of new music. Additionally, since we have access to consoles with higher specifications, we will be taking a more realistic approach to the graphics this time.

“In any case, our goal is to make it easier for gamers who want to play Lollipop Chainsaw to do so. Please look forward to the game’s 2023 release.

Keep your eyes peeled for more Lollipop Chainsaw news in the near future.

The post <em>Lollipop Chainsaw</em> Is Getting a Remake appeared first on MetalSucks.