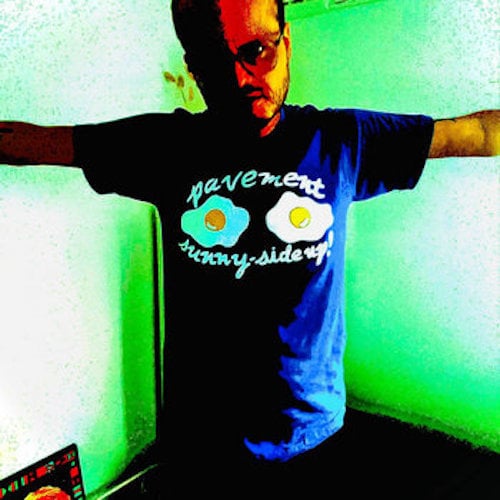 British recording artist Mark Hex remains an enigma, and this Yuletide, he’s given the world a true gift from his soul: a new EP called This Weak Would Kill The Weak. This collection of eight tracks, all under three minutes, is even more gonzo than No Wave: it’s an onslaught of stream-of-consciousness poetry recitations, atonal guitar, random musings, and acidic nostalgia for a lost time in Deutschland.

“The new EP is anti-production, anti-autotune,” he claims, with truth. The album opens with Bomb Threat, which assaults us with sinister screaming and distorted guitar licks,  The Day Lou Reed Died does indeed sound like a mournful drunken tribute done in the style of Velvet Underground, where he croons “the day Lou Reed died” over and over – almost like a Donovan intro. Hey! I Used To Live In Berlin details his feeble attempts at the German language. States, a Pavement cover of Two States, has a catchy un-amped bass line and nefarious whispered delivery that works as well as the original. God Is Dog careens into Alien Sex Fiend world, although cat people might have beef with his bold proclamations.

While you can hear sonic influences from Stump, Lydia Lunch, The Normal, and Sebadoh, the occasional cameo of the synth drum demo button, irreverent singing, and unedited smoker’s coughs also brings to mind outsider geniuses Wesley Willis and The Shaggs. It’s pure punk in distilled form: completely unlike anything else you’ve ever heard; often absurdist in nature, but with its own raw charm. There are no lyrics provided, but with acerbic declarations bitching about British television channels, he, in turn, channels the zeitgeist. There’s nothing on the telly, darling.

Need to liven up the family gathering this holiday season? Gather ’round the fire, put this little EP on the speakers, and go caroling with Mark Hex.

You can stream and purchase This Weak Would Kill The Week below:

Mark Hex has been releasing music and “making a racket” in London and festivals across the UK. He is also known to play other people’s records at his DJ gig at the London dark club, Slimelight.

The post Listen to British Darkwave Artist Mark Hex’s Irreverent “This Weak Would Kill The Week” appeared first on Post-Punk.com.