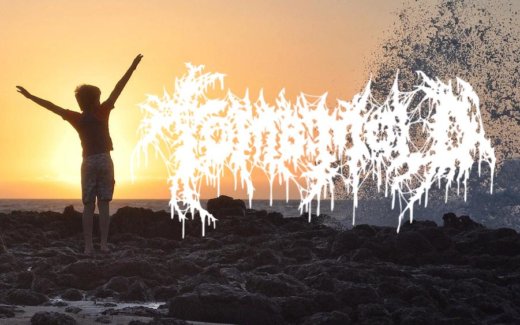 Right now, the word on the street is, death metal. In the past five or so years, metal’s grodiest subgenre is back in a big way, with an awesome crop of young and disgusting bands — Gatecreeper, Witch Vomit, Creeping Death, Mortiferum, Undeath, Temple of Void, Blood Incantation, and Bedsore, to name only a few — creating music that makes us want to throw on our vests, drink 11 consecutive Beckses, and yell, “UNGH!” at the top of our lungs. And one such band is undoubtedly Canadian oozers Tomb Mold, who have consistently made some of the raddest lichen-friendly metal this or that side of the border. So it’s with great relish, and maybe a little gravy if you got it, to announced that Tomb Mold have surprise-released a new three-song EP today!

Now, before we begin, we should warn about this EP — it taps ass on a lazy Tuesday morning with a poorly-rolled joint in its mouth. Yes, the new Tomb Mold EP, Aperture of the Body (which is Academic for “stink hole”), is an instant classic, featuring one ambient intro track and two death metal jaw-rippers that have us saying “rad” a bunch in our enthusiasm. It’s a hard choice as to our favorite song on here, too — the wily-ass title track is super exciting, and gives us that old-school death metal twinge in our perineums, but closer “Prestige of Rebirth” ends with a sonic space odyssey that impresses us with its scope and grandeur. All of which is a long way of saying, “stink hole.”

Anyway, no more talking, it’s fungus o’clock. Check out Tomb Mold’s Aperture of the Body below. The album is available for physical purchase, but it looks like the first pressing is already sold out, so you either got in early or you’re fucked. Enjoy, and don’t forget to eat your own fuckin’ foot.

The post Hope Your Tomb Is Moist, Because Tomb Mold Just Surprise-Dropped a New EP! appeared first on MetalSucks.