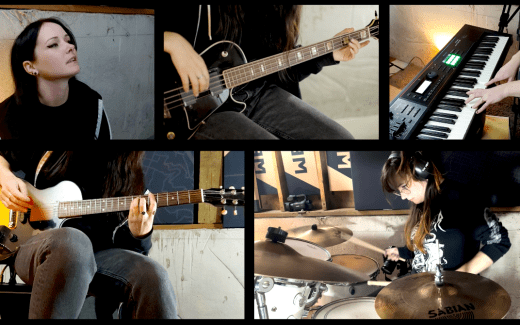 Goth rock duo Hoaxed posted a behind the scenes look of them playing one of the tracks from their debut album Two Shadows earlier today, giving fans a glimpse into their chill Pacific Northwestern style of jamming.

Having known each other for years and played in other bands in the past, it’s immediately apparent that both vocalist and guitarist Kat Keo and drummer Kim Coffel are familiar with how each other plays. This video in particular serves to showcase their multi-instrumental capabilities and how they managed to record their debut album.

“The ‘High Seas’ playthrough pulls back the curtain on our process and gives a glimpse into the layers behind the recordings.”

As you’ll hear in the clip below, “High Seas” has a driving sound that still manages to float about like a foggy morning on the bay. It fits perfectly into the band’s self-described blended style of “heavy melodic rock with captivating hooks, gothic undertones, undeniable metal, and tinges of Americana.”

The post Hoaxed Take to the “High Seas” in Latest Playthrough Video appeared first on MetalSucks.