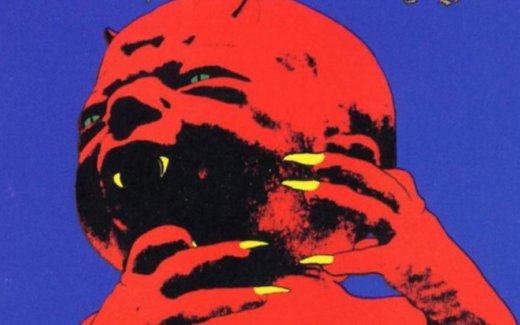 Becoming a parent is one of the more metal experiences you can ever have. One minute, you’re an independent being, with agency and pastimes; the next, you’re covered in Polly-O vomit at a Mexican restaurant, asking someone if they can bring you a slightly watered-down cranberry juice and some napkins. The intensity of this experience may sound subdued, but one cannot underestimate the chaos, panic, and roiling desperation that goes in inside a parent while putting it all on the line for some adorable little wriggler. After a whole life of lashing out at the world, metalheads are finally treated to the ultimate moment of lashing in.

There are so many things I wish someone had told me before I had a kid. So here, for anyone who reads MetalSucks who might breed (all six of you), are a few pieces of advice for the metal dads-to-be-out there. And to the metal dads, and the adoptive dads and stepdads and grandpas and uncles who help out on the regular, and all of the other people out there working hard to raise happy kids in a Slayer logo-filled household: we salute you. Thanks for fighting the good fight.

To those who aren’t there yet, here’s what I think you should know.

Do shifts, and get stuff done at night

For the first six months or so, your baby will probably wake up constantly, and will need to be fed every couple of hours. So you and your partner should do six-hour shifts: one of you is on baby watch from 8pm to 2am while the other one sleeps, then you trade off. This ensures that someone gets at least six hours of sleep a night. Meanwhile, if you take the night shift, once your baby starts sleeping for larger chunks of time, that’s when you can do stuff. Never have time to practice guitar? Bust it out. Book you always wanted to read? Make coffee.

Just get an app, man

I get it – you think of yourself as a put-together, in-control person. But for a while, this baby’s living by the numbers. They need to eat X ounces of milk/formula every day, get X hours of sleep throughout the day, and poop X times a week. So just get some app and plug in the info. It feels modern and goofy and the apps all talk to you like you’re some big, gentle jackass, but it’s just the easiest way to keep track of things. Just do it.

Doom metal can help a baby sleep (but not too loud)

Someday, I am going to send Monolord flowers. Their 2019 album No Comfort kept my baby asleep so many times during those first three months of their life that I owe the band a debt of gratitude; I was actually able to write a whole book at night thanks to them. So if you need some music to soothe your baby, doom works, especially if it’s not very crusty and hostile. Slow, groovy shit like non-Dopethrone Electric Wizard and Young Hunter has a pulsating, kinetic quality that probably reminds your kid of the womb.

You’re about to be living in a GG Allin concert

Urine, feces, vomit, snot, pus, flaking skin, acne, blisters – all this and more will run down your body while you’re a dad. At least once, your baby will drink a full bottle, look you dead in the eye, puke it everywhere, and then cry at you like you let it happen. Rather than saying, Get over it, my advice is to laugh at it. Like, this is the stuff of Peter Jackson’s Dead Alive. You’re a clown waiting for a screaming booger to poop slime all over you. Fucking hilarious!

Get ready to cry like a bitch (and love it)

You’re gonna cry, man. Maybe it’ll be tears of joy when you first hold your child. Maybe it’ll be that you’re watching some kids’ movie from your youth, and you get struck with some memory of you fucked-up but at times beautiful childhood. Or maybe you’ll just break down about how tired you are. No matter what, don’t hold it in. THAT’s the coward’s move. Just cry. Cry like an old Sicilian woman lying atop her husband’s coffin. Cry like Tobias Funke in the shower in his jean shorts. It’s healthy. It feels good. Don’t be a wimp, weep like a man.

You’re no longer cool, so stop trying to be

Once you’re a dad, the concept of ‘being cool’ or ‘competing’ or any of that nonsense goes, for at least a little while, right out the window. It’s not that you can’t take the occasional night off and skull some coldies or go see a band, it’s that your priorities fundamentally change. Discomforts you tolerated before in the name of edginess just seem silly now. Sleep becomes a major priority. And honestly, that’s how it should be. You’ve got this little bean at home, doing amazing things, waking up parts of yourself you’d forgotten about. Who cares that your childless friends got to see a band you like for the sixth time?

At least for me, as a big fan of extreme metal, this was an issue. That shirt with the dismembered corpse all over it? Not something you want to embed on your newborn’s mind. That one with the naked demon spitting blood all over their supine human lover? Ditto. And even if you don’t think your kid will remember these graphics, or care, the other parents will definitely have some issues with them when you’re at the playground. While it’s easy to say ‘Fuck ‘em,’ it’s a little easier to just figure out which shirts only come out for the Creeping Death show you plan six months in advance.

…because you might actually want to stop wearing some of them

The thing is, you’ll begin to self-police on this issue. For example, I used to have a battle jacket with Cannibal Corpse’s Butchered at Birth cover as the backpatch. I loved that vest, and that will always be my favorite Cannibal album…but after becoming a dad, it hit different. Babies, you know? Maybe it was psychological, maybe it was hormonal, or maybe I saw how it affected my wife and disliked that. No matter what, I just knew. Don’t fight your gut, man. Don’t play the Well, it SHOULDN’T bother me game. Just do what you gotta, including saying goodbye to some admittedly rad merch.

That said, the spooky, fun stuff, your kid will love

One thing I want to make clear is that having a kid does not deprive you of all of your cool metal shirts, and posters, and records. The truth is, a lot of the stuff that ISN’T deeply horrible – the wizards riding dinosaurs, the grinning skulls, the crumbling crypts – your kid will actually dig. Kids love loud, intense things like sharks and monster trucks and Halloween. Use your best judgment, but make sure your kid gets plenty of awesome stimuli in their life.

Listen to your pediatrician, but feel free to push back

Our first pediatricians were a nightmare. The office had three of them rotating – one of them guilt-tripped us for the baby not pooping soon enough, another tugged at the baby’s umbilical stump (which the nurses at the hospital specifically urge you not t do), and the third tried to book a surgery that our baby didn’t need. Our new pediatrician is awesome, but part of that is that she talks options. My point is, I know you’re scared, and your baby needs a doctor, but this is where your metalhead sense of, Now wait just a minute can help. Ask all the questions. Find a new doctor if yours feels off.

Reach out to other dads in metal

No man is an island, especially when someone who ate milk for dinner is screaming at him for reasons beyond their comprehension. There are other dads out there, and other metal dads especially, who want to give you advice on both childcare and blackened thrash records. If there’s one thing that both dads and metalheads love to do, it’s know things about topics, and you can bet another metal father will want to give you advice on how they did it. Hell, I wrote this article.

Rob Zombie, Twisted Sister, Rammstein, AC/D – if your kid doesn’t outright reject metal, chances are they’re going to love this kind of stuff. Kids love rhythm that really grabs them, which is why so much children music is so plinky and plunky. Plenty of the metal that might seem mainstream and goofball to you will at least get them through the door. Also, throw some non-metal stuff at them regularly. Maybe they’ll love it, but even if they don’t, it’s good for a kid to understand the concept of “what’s on the radio.”

You’ve been training for this your whole life.

My dude, you fuckin’ got this. All those years being tossed around mosh pits, staying up late partying and listening to records — did you think that was just for fun? Nope, now you get to use it all in lifting up this beautiful life you’ve created. It’s super easy to feel overwhelmed by the sheer magnitude of what you’re undertaking, but know that there’s no one better equipped to make this little person happy than you. Dive in with your heart out, bloody and raw. Dad harder than anyone has ever dadded.