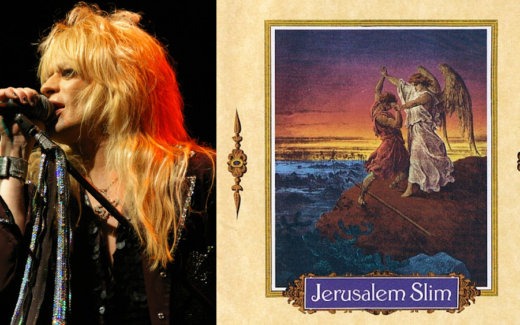 Most of us know Michael Monroe as the frontman of Finnish hair metal act Hanoi Rocks. But in the early ’90s, Monroe helped launch the supergroup Jerusalem Slim, who featured his bandmate Sami Yaffa on bass and Billy Idol’s Steve Stevens on guitar. The band only released one album in 1992 — and now, in a new interview, Michael explains why.

In an interview with Mitch Lafon (transcribed by Ultimate Guitar), Monroe says that things started to go awry when the band didn’t get the right producer:

“I wanted [E Street Band guitarist] Little Steven to produce it, and that would have been good. But then, the record company didn’t allow that. I was like, ‘What? You don’t want to do Little Steven to produce it, what I’m going to do now? He’s the guy I wanted to work with.’ Steve Stevens didn’t support me either on that and then they went for this German heavy metal producer, Michael Wagner, who was the flavor of the month, at the time, because he’d done the Ozzy Osbourne album [1991’s ‘No More tears’].”

“He was the worst possible person to produce. I mean, I’m sure he’s a good producer, but he was the wrong combination, him and Steve Stevens together. It turned into heavy metal histrionics, guitar solos, and it just took a turn for the worse. It wasn’t my record anymore. It wasn’t rock and roll anymore. It became this heavy metal noodling, million notes per second. Steven even started playing a completely different style that he knew I didn’t like.”

During the recording process, Monroe began to realize just how much of a shitshow the album was becoming:

“It was supposed to be a couple of weeks of guitars – ended up being three months of guitar hell. And I was freaking out, trying to stop the project, ‘This is not going to happen. It’s a record that everybody hates, and it’s not my record anymore. It was my deal with Polygram Records.’ […] That was the worst time in my life. I couldn’t get anyone to help me to stop the record, and they just continued. I mean, the days were like, say, Steve would play a solo, and Wagner was just like, ‘Yeah, man, let’s do the solo,’ and I said, ‘No matter how great the solo is, it doesn’t save the song if the song doesn’t have it.’

Check out the interview below — it’s kind of hilarious, even if it’s also terribly tragic