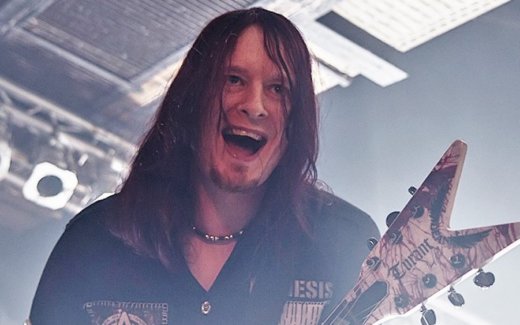 While Arch Enemy were recently forced to push their new album Deceivers back by two weeks, the band are apparently doing pretty well for themselves. In a recent interview, guitarist Michael Amott admitted that the band’s schedule kept them from being slammed by COVID as much as some of their peers were — and that at the end of the day, his career is pretty much what most metalheads dream of.

Speaking to Blabbermouth, Michael was asked about the effect the pandemic had on Arch Enemy’s career. And while he said that 2021 was tough for them, he also acknowledges that the way the band’s schedule was organized kept them from feeling the brunt of the lockdown:

“We had friends in other bands that built huge stage productions that were ready to roll in early 2020 and invested a lot of money. They launched their new albums and then it’s not happening, or you have to go home in the middle of it. That was just brutal. We didn’t have that. We had that built-in year where management’s word was, ‘Take a year off and write a new record and start recording it.’ That’s what we did. At the same time, the atmosphere was weird. [Laughs] You saw everything going on, but at the same time, we were not affected by it in a business sense. Of course, moving into 2021, it started affecting us a little more because we had plans and those plans did not happen. I don’t like to complain about it because a lot of fellow artists were hit a lot worse by it. Also, a lot of people were affected a lot more by it than me personally.”

Amott was then asked whether or not he was a workaholic, or if he enjoyed taking time off. His answer:

“I do like to work. It’s just so strange in this profession because my hobby, my passion, my whole teenage life became my career and my work. I’m still that kid inside. That’s still my hobby. I never developed a hobby; I never started golfing. [Laughs] I listen to fucking thrash metal, speed metal records on vinyl and play guitar. It’s what I do. I never really grew out of it. It’s a bit of a sad story, really. [Laughs]”

Not a bad way to live!

Arch Enemy’s Deceivers drops August 12th via Century Media, and is available for preorder. Check out the album info below.

The post Arch Enemy’s Michael Amott on Downtime: “I Listen to F***ing Thrash Metal on Vinyl and Play Guitar” appeared first on MetalSucks.