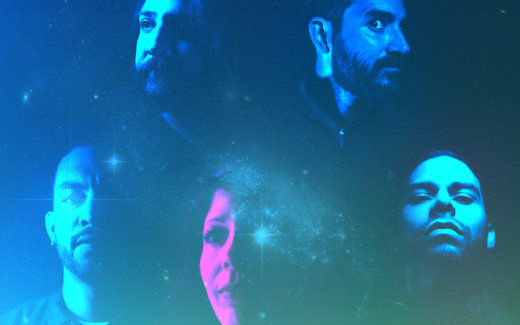 Listen to Moths‘ riveting new album Space Force, and one might assume the progressive stoner-death band call Brooklyn or Portland their home. But no dice — Moths hail from San Juan, Puerto Rico, a city that many of us have heard of or visited but, if we’re being honest, on which a lot of us might not know a ton about. The truth is that while Puerto Rico has a long and storied musical history, its metallic tradition hasn’t received much widespread recognition. Of course, a record like Space Force will help change that, as Moths’ unpredictable sound will no doubt excite a legion of new listeners.

To learn a bit more about Puerto’s music, people, and culture, we asked Moths to give us 10 super metal things about Puerto Rico. Here’s what they sent our way…

Puerto Ricans have been tied to all major musical developments in the New World since its inception. This is partially due to its favorable positioning as the first stop between the Eastern and Western Hemispheres, but also due to the caliber of musicians that the Island has in stock. Some great accomplishments include shaping the sound of jazz through the relation between Danzas and the proto-kazz of Two Step Music, forming part of James Reese Europe’s band, the rise of hip-hop and rap music, and serving as the foundation for the sound of jardcore punk in New York, and even metal. Being trailblazers is hella metal, if we do say so ourselves.

Puerto Rico is recognized mostly for Bad Bunny, reggaeton, and salsa. But Puerto Rico has had a thriving rock and heavy metal scene since the ’60s and late ’80s, respectively. Bands like Cardinal Sin, Puya, and Dantesco among others have had recognition outside of Puerto Rico, but due to the location of the Island, most bands just don’t make it because it’s way too expensive to travel and tour. The scene has been a very diverse one too. Puerto Rico has had bands that play death metal, black metal, stoner metal, progressive metal, doom metal, power metal, and hardcore. It’s also a scene that has been resilient, due to, particularly after all the natural disasters that have happened in the last five years and the pandemic, a lack of venues, not to mention other issues. But bands still find a way to continue to write, record, and perform live.

Talk about a metal national hero — a man who literally fought U.S. tyranny and was a freedom fighter, an ally and contemporary of Dr. Martin Luther King Jr., and much like Dr. King, was assassinated by the United States government to put out the fires of an impending revolution. For his fearlessness in the face of immense adversity, and for putting Puerto Ricans in the conversation of equals rights, we remember him as a hero. Although the fires were seemingly put out, the embers left over have stoked a passion in the young, educated men and women of the Island to have a brighter future for Puerto Rico.

The Summer of 2019 is one that a lot of Puerto Ricans will not forget. After a group chat that included the former Governor, Ricardo Roselló, leaked, with homophobic and misogynistic messages about other politicians, members of the local media, celebrities, and others, the people of Puerto Rico went to the streets to protest and demand the resignation of Roselló. After strong pressure from the people, the media, and other politicians, Roselló resigned. It hasn’t changed the political climate that much, but we’d like to think this is a start of a new awakening against the politicians of the Island.

Puerto Rican food is Metal as fuck. Mofongo, lechón, bacalaitos, alcapurrias, etc. are some of the must-have dishes, if you’re ever in the Island. This is food so good it would probably cause a heart attack, and that’s pretty metal…not a lot of options for veggie/vegan people though!

During the last decade a strong community of Queer and Transgender men and women have begun to create a safe space within all social spaces in which artist and musicians can thrive. Thanks to this, an influx of talent that the metal and punk scenes haven’t seen in years has poured in to happily make their mark in Puerto Rico. The community has surely come a long from having to express their love through the no-gender Bohemias of the 20th Century.

Puerto Rico has its own Lepidoptera species

Puerto Rico’s Harlequin Butterfly (Atlantea tulita) is a species of butterfly that only exists in the island’s western region. It has awesome wings characterized by their orange, brownish-black and beige coloration patterns. Only two populations are known to still thrive in very particular forests. So special, there’s an annual festival celebrated in the northwestern municipality to create consciousness and help conservation of this really cool-looking lepidoptera.

A wide variety of ecosystems in such small Island

An ecological miracle. Having lost more than 90% of forest cover between 19th and 20th centuries due to human practices such as timber, agriculture and cattle production, Puerto Rico witnessed a recovery since the late 1940s to more than 40% of forest cover in the present. The island has seen a trend contrary to that of other countries in the tropics. Although main factors have been associated with socioeconomic changes, it’s impressive how the land managed to keep enough nutrients to grow new life. Another fact that’s remarkable is that you can find several very distinct ecological zones in such a ‘small’ area (approximately 100×35 miles). You can be at a dry forest with temperatures over 100* F, but with a very short drive arrive to a humid forest, or a wet forest, or a rainforest, or even a mangrove forest.

Puerto Rico is a place full of myths, legends, and superstitions

Throughout the history of the Island, there have been many stories that have been passed from generation to generation. Since the Spanish occupation, there have been stories like the one from “La Capilla del Cristo,” which is the story of a small chapel at the end of Cristo Street in Old San Juan. According to the story, in 1753 a man named Baltazar Montañez was racing his horse down Cristo Street, where at the end there was a cliff, and they ran off the edge. The legend says he prayed to the saint of salvation, which was answered, and he survived. Other myths like “El Chupacabra” have also originated in the Island.

Heat = Hell, which equals metal, right? Puerto Rico is a tropical island, which means we have temperatures around 80* to 90* F during the whole year. Right now, in the summertime it goes all the way up to the high 90s and even the 100 degrees, which is not as fun, but it’s a great opportunity to go to the wide variety of beaches, rivers, and so on.

The post 10 Metal Things You Might Not Know About Puerto Rico, by San Juan’s Moths appeared first on MetalSucks.