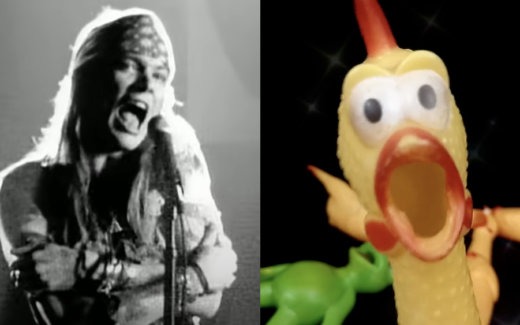 All this talk about the Rage Against the Machine reunion has been an important reminder that, because of expensive ticket prices, major concerts aren’t always accessible to fans who want to see a band. Not long ago, Guns N’ Roses were the hot reunion of the month and they’ve remained steadily on the road since their 2016 reformation. Unfortunately, the last few dates of their European tour have been plagued by technical and health issues. But one TikTok user has given us the best GnR show we could imagine. David Foley, a.k.a. @mr.chicken.official recorded a cover of the song “Sweet Child O’ Mine” performed entirely by a rubber chicken.

The video, which you can watch below, is every bit as good as it sounds—a rubber chicken absolutely squeaking its heart out to Axl Rose’s iconic vocal lines. Mr. Chicken gets an assist from an unnamed rubber frog, who lends his voice to the track for the lower-pitched lines.

There’s no word on if Mr. Chicken shows up to scheduled appearances on time or what his relationship with founding Guns N Roses drummer Steven Adler is like. But there is a concerning, unexplained pile of rubber chickens in the background, suggesting that he is unkind to his groupies.

“Sweet Child O’ Mine” has received more attention than usual over the last few weeks with its inclusion in the trailer for Thor: Love and Thunder, which sounds kind of like the god of thunder’s new VH1 reality show. Maybe that’s not far off; in an interview with Louder, Thor director Taika Waititi said:

Check out Mr. Chicken on TikTok: