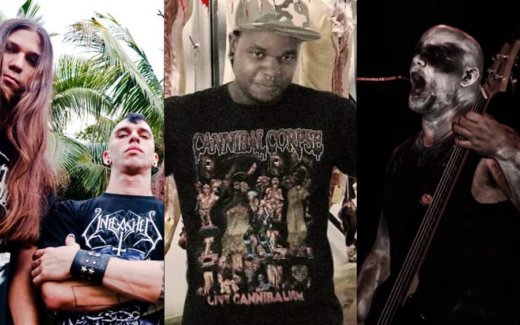 “I think that heavy metal music in Cuba will always be a style of music with lots of attitude, rebelliousness and a lot of strong words. Heavy metal here reflects the situations we live in every day. It speaks about all the challenges and the taboos that you confront every day. We’re going to keep writing and making music about all of these problems that we face,”

Salsa, rumba, reggaeton — these are the musical genres that come to mind when thinking of Cuba. Rock and metal were once the “music of the enemy” within the country, though there have been defiant rockers who have brought their own form of musical revolution to Cuba throughout those trying times. Now, rock, metal and punk have a more accepted place in the nation’s musical culture.

From the ‘60s to the ‘80s, rock music was banned in Cuba, seen as a subversive ideological corruption of the people. In the 1990s, once Cuba stopped receiving funds from Russia, things began to open up and attitudes towards Western musical genres began to soften. At Havana’s Patio de Maria, Cuba’s first professional rock groups began performing. Fidel Castro unveiled a statue of John Lennon in 2000, with the bar El Submarino Amarillo, “The Yellow Submarine,” opening.

In the mid 2000s, state-run cultural centers began, and musicians who were once condemned for their rebellious, rock lifestyles were receiving government assistance through the Agency of Rock (or when considering hip-hop, the Agency of Rap), as long as they stayed within the ‘boundaries of expression.’

Nicholas Brennan, director of Los Últimos Frikis, a 2019 documentary chronicling Cuban thrash metal band Zeus over a ten-year period, said via an interview with Reason, “The real freaky, scary thing for authoritarian regimes is individual thought. People banding together. The Agency of Rock was a way in trying to organize these Frikis — giving them a place to play but keeping them in a bubble.”

Government-supported, independent, or Cuban defectors. Thrash metal, black metal or death metal. Cuba has seen it all. So without further ado, here are 10 bands from the Pearl of the Antilles.

“We’re the last freaks in Havana,” says Zeus frontman Diony Arce in the 2019 documentary Los Últimos Frikis, which takes a look at Zeus, as well as the Cuban metal scene as a whole. Zeus, being one of the biggest metal bands in Cuba, was formed in 1988 and took inspiration from thrash and groove metal powerhouses Sepultura and Pantera. Despite being active for a decade, the band didn’t put out a full length until the year 2000 with Hijos de San Lázaro.

Before Zeus, Arce was in Venus, the first heavy metal band in Cuba, who were eventually shut down by the regime, with Arce being imprisoned for six years due to having long hair and encouraging a rebellious rock attitude within the citizens of Cuba. After his imprisonment, Zeus teamed up with the government who once tried to hold them down, joining the Agency of Rock, a program meant to assist rockers by offering them a chance to become “official state rockers” and thus, legal opportunities to perform in the country.

Formed in 1994, groove metallers Tendencia are one of Cuba’s most famed musical exports. They have won many awards and played several festivals throughout Latin America. After releasing multiple demos in the ‘90s, the band dropped their first album at the height of the nu metal craze in 2001 with Re-evolución. As they progressed through the 2000s, Tendencia adopted a sound that feels influenced by New Wave of American Heavy Metal acts like Lamb of God, though they also have additional percussion and a dreaded look which ties them in with the nu era.

Cuban black metal warrior Conspirator is known for Skjult as well as projects Shrine Ov Absurd, Black Winged Goat Messiah, and Svartmass. Skjult has the most releases to its name, with the first, Within the Flesh, coming out in 2016. Whichever record you pick to listen to, you’re going to get some pitch-black tainted metal with a touch of blasphemy. With Skjult’s latest, 2020’s The Voyage, Conspirator takes on a few covers by influential bands Celtic Frost and Hellhammer, along with the title track.

Black metal band Mephisto started in 1996, but spent years in the darkness, releasing demo after demo. Then, in 2016, they released their first LP, Reborn from Ashes, which was put out on Concreto Records. Of note is their music video for “Pentafixion,” which depicts graphic scenes of domestic abuse and therefore was refused permission to be included in the 2020 Lucas Awards in Cuba. A few of Mephisto’s members also belong to grind band Gore Encyclopedia, so look into them to continue your Cuban metal education.

“Vikingos!” Cubans will sometimes say when they are in a canoe together. This act is a nostalgic one, referencing a Viking show that was popular on Cuban TV. With Helgrind, one finds a group of Cubans who have taken Viking worship to the next level, making a Pagan/Viking themed band whom have the strength and chops to deliver a successful raid or two if they desired. Cráneo, metalheads!

From Marianao, La Habana, Hipnosis are a hybrid metal band combining thrash, goth and power metal to make their own special smoothie. After forming in 2001, the five-piece reached the masses with the music video for their track “The Chosen One,” released in 2004. The band then left Cuba for the US, arriving on July 21, 2013, requesting political asylum and thus becoming the alleged ‘first metal band from Cuba to defect to the US.’ The reason for the band’s defection is debated, though with Cuba being a limited market which famously doesn’t grant travel visas for shows in North America, the Cuban government cracking down on musical expression seems to be their motive. They currently continue to perform in the US.

The close proximity of Florida to Cuba makes for some cultural bleed-over, including death metal. As one can see with Havana’s Combat Noise, just because they aren’t a household name like Cannibal Corpse doesn’t mean they shouldn’t be. Combat Noise are a war-themed outfit who formed in 1995, and they haven’t slowed down since, with their full-lengths ensuring them a bullet hole in Cuban metal history. A few of these releases came out via Brutal Beatdown Records, Cuba’s extreme music label which also put together the Brutal Beatdown Fest. Currently, Combat Noise are still hitting the clubs hard with headlining shows, so next time you travel to Cuba for vacation, make sure to hit up one of their gigs.

We know Bonus is a strange name for a metal band, but really, who doesn’t like getting a bonus? Meanwhile, the band’s brand of power/progressive/melodic fits with the optimistic name, with each twist and turn in their musicality feeling like a little bonus. Their debut record Disyuntiva (2022) has some similarities to those of bands like Lacuna Coil, blending male and female vocals in front of a semi-symphonic sonic backdrop (through the band make it all undeniably Cuban via their Spanish lyrics).

It would be foolish to think that Cuban metal would shy away from grotesque imagery inspired by real-life situations. Obscuro, who obscure their faces with ominous-looking cloths, bring the morgue to Cuban speakers with goregrind that infuses elements of black and death metal, making for one lethal cocktail. Their latest effort is 2020’s Carnicero  (Butcher) which features a hairy-armed, red-hatted (not Fred Durst) sadist having his way with a victim in a meat locker. Skinning asses raw, indeed.

Solo project Desgarramiento are the outlet of sonic butcher Luis, who stands in front of a line of swine at a slaughterhouse in the band’s promo photo. Being a gore/porno grind band, sexual sickness is the vibe here, and splits with bands like Harlot Shart will make you feel like you should be wearing protection while listening…you know, just in case. The band share a label, GrindHouse, with fellow Cuban sickos Obscuro.