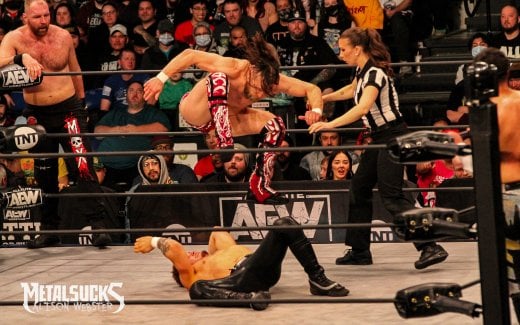 New Periphery got announced, the world lost a force of nature in Jeff Beck, and a couple new albums came out that our reviewers absolutely loved. The past week was pretty much the definition of a mixed bag. Still, it’s finally the weekend so it’s time to relax, take stock of the things you enjoy, and do that shit.

As you’ll probably notice below, we’re changing up our weekly playlist. Instead of being a gargantuan list of songs going back a couple years, we’re gonna focus on the most recent tracks that caught our attention, either through major news announcements or what’s popular on metal social media and whatnot. We’re giving you a more concise listening experience so you can stay on top of what’s new, what’s hot, and what we’re just jamming to this week. Some songs may stick around for a week or two, but we’ll do our best to rotate things when needed.

So check out the top 10 stories from the last seven days, listen to some killer tunes, and then check out the rest of what we’ve got going on here at MetalSucks.

Corey Taylor on Being “Kidnapped” by Soulfly: “It Was One of the Best Experiences of My Life!”

Jeff Beck Has Passed Away

Review: Katatonia’s Sky Void of Stars is an ‘Otherworldly Wonder’

After Knowing the Guy for Years, Tim “Ripper” Owens Was Surprised Jon Schaffer Stormed the Capitol

The post Soulfly Once ‘Kidnapped’ Corey Taylor, Bush’Thrax Tour Will Be ‘Badass,’ and More Top Stories of the Week appeared first on MetalSucks.