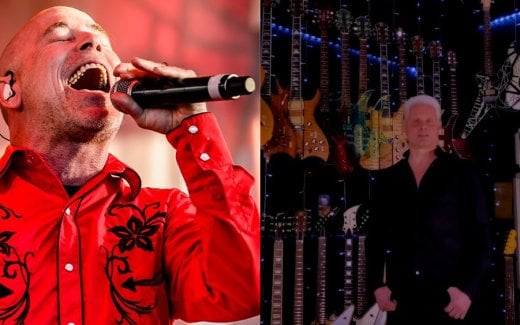 Ozzy or Dio. Diamond Dave or Sammy Hagar. Tim “Ripper” Owens or Rob Halford. Whenever a band replaces their lead singer, it’s only inevitable that some fans gravitate to one iteration of a band over the other. For fans of classic thrash band Anthrax, that conversation falls between Joey Belladonna and John Bush. And while both options are absolutely killer, fans of the latter’s output could soon get to relive their favorite ‘Thrax songs in an upcoming tour.

While speaking with Eonmusic, former Anthrax guitarist Paul Crook revealed that he’d been in discussions with the current Armored Saint frontman about putting together a special tour that would feature Bush’s time with the band.

Bush replaced Joey Belladonna in 1992 after the latter vocalist was fired from the band. He went on to front the band until his departure in 2005. During that time, he was involved in what I would personally consider some of Anthrax’s best releases to date: Sound of White Noise, Stomp 442, Volume 8: The Threat Is Real, We’ve Come For You All, and the compilation CD The Greater of Two Evils.

Given the fact that 2023 marks the 30th anniversary of Sound of White Noise, the timing for something like this would be absolutely perfect.

There’s been a lot of talk in recent years about whether the Bush-era of Anthrax would get its due. To their credit, Anthrax has been known to roll out the hit song “Only” with Joey Belladonna singing, and that’s got its own style to it, but a dedicated tour with John Bush at the mic is something else completely.

Back in 2020, Bush said in an interview that he would enjoy playing those songs again if Crook was also involved, who had been with the band from 1995 to 1999.

“I said something about wanting to do it with Paul if I did it, because I really love Paul; he’s a really great guy, he’s an amazing player, and he was involved in those couple of records. He played on Stomp [442] and he did the tour of that, and then he also recorded a lot of Volume 8. So the reason I thought it would be cool to have him involved if I did something like that is because he was involved in two of the four records of original material. And I just like him as a person; he’s just one of the nicest guys and fun to be around.”

It should also be noted, most importantly, that the rest of Anthrax (Charlie Benante, Scott Ian, Frank Bello) would likely not be involved in whatever Paul Crook was referencing. Those guys are going to be busy writing and recording a new record when they’re not out touring or playing drums for Pantera.

So what do you say, Anthrax fans? Is this something you can get behind? Or are you a ride-or-die fan for Joey Belladonna-era Anthrax?

The post Paul Crook Confirms That John Bush-Era Anthrax Tour is “Going to be F*cking Badass” appeared first on MetalSucks.