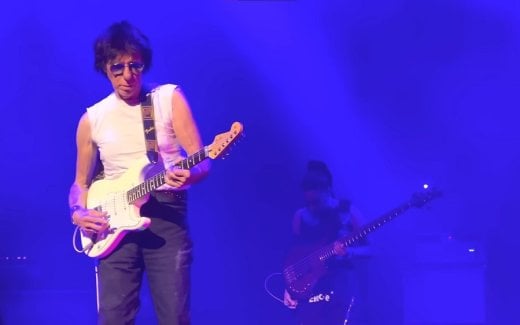 The world lost another transformative talent and a lasting connection to rock’s more formative years, as Jeff Beck has passed away. According to his family, Beck died peacefully Tuesday after “suddenly contracting bacterial meningitis.” He was 78 years old.

There are few guitarists that have ever, or will ever, be as influential to rock as Jeff Beck was. Having rose to prominence as Eric Clapton’s replacement and Jimmy Page’s bandmate in The Yardbirds back in 1965, Beck ultimately became a solo artist who melded jazz and rock together, and helped inspire psychedelic rock and heavy metal artists all over the world.

There are too many hits and highlights to mention when discussing Beck’s career. He was an eight-time Grammy Award winner, with another nomination coming up this year for his work on the title track for Ozzy Osbourne’s latest release, Patient Number 9. Other accomplishments include winning the Ivor Novello for outstanding contribution to British music, as well as being named a two-time inductee to the Rock and Roll Hall of Fame for his solo career and his time as a member of The Yardbirds.

In the wake of Beck’s passing, musicians from around the world have begun paying tribute to the veritable guitar god. Black Sabbath guitarist Tony Iommi described Beck as a “nice person and an outstanding iconic, genius guitar player” whose playing was “very special & distinctively brilliant.” Kiss bassist Gene Simmons said Beck’s death was “heartbreaking,” adding that “no one played guitar like Jeff.”

Beck is survived by his wife Sandra. At this time, his family is asking for privacy “as they process this tremendous loss.”

As the world processes this tremendous loss as well, we at MetalSucks want to wish Beck’s family and friends our deepest condolences. There will never be another guitarist quite like Beck.

The post Jeff Beck Has Passed Away appeared first on MetalSucks.