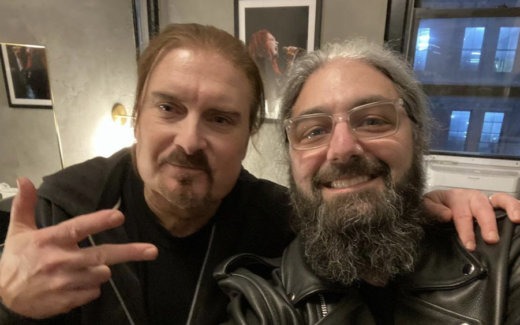 In the past, Dream Theater frontman James LaBrie and former Dream Theater drummer Mike Portnoy haven’t always seen eye to eye (as Metal Injection notes, Portnoy once called James’ vocals “annoying,” which is a little rough). But lately, the two seem to have squashed the beef, with James offering Mike a shout-out when the drummer caught the band from a crowd for the first time. Now, in a recent interview, LaBrie made it clear that he’d be open to working with Portnoy again in the near future.

Speaking to Scott Penfold of Loaded Radio (as transcribed by Blabbermouth), James was asked if there’s any chance that he and Portnoy would play together again. Here’s what he said:

“I think anything is possible. Listen, Mike and I are in a great place. We’ve been texting back and forth from time to time. I wished him a happy birthday; he wished me a happy birthday…So we’re staying in touch.

“Listen, Mike’s a great musician. Put it this way… Who knows what the future holds? Maybe there’ll be a day and I’ll go, ‘Holy shit. This track would be perfect to have Mike do this.’ Or it might be something that comes from him, from his side. So we’ll see. You know what? I’m open. And that’s the thing, is that we’re in a really good place now. And yeah, it should have happened a long time ago. But human beings, we have a tendency to… our pride gets the best of us.”

Look, I ain’t a Dream Theater guy, so to me this is like being told that the Construction Worker might rejoin the Village People. BUT — as a metalhead I am aware that this split was contentious, and that fans of the band will forever have a huge fondness for Portnoy, so this is cool. More than anything, as a person, I think it’s cool to see two older dudes getting over their past issues and resuming an amicable relationship. Proves you can grow up.

Check out the full interview below: