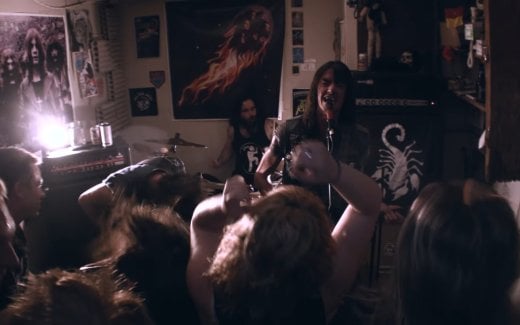 Put on your Canadian tuxedo, open a can of Lucky beer and get ready to rock like it’s 1982. When it comes to throwback bands performing speed metal and UK-influenced traditional heavy metal, Canada has been at the forefront of keeping the spirit alive. Perhaps because the style is more accessible than most, Canadian bands playing the NWOTHM style have found more success than most, with several of the bands listed here playing huge tours with legendary acts or doing their own tours in the UK and beyond. Even if you’ve overlooked some of these bands before, it’s never too late to get into them now, as this music is as timeless as the bands that inspired it.

Since forming in 2011, Calgary’s Riot City have been setting the NWOTHM world on fire with albums that are 10/10s whether listening to them in 1984 or 2024. Burn the Night was released in 2019 and made waves across the pond, leading to Riot City touring the UK. In October 2022, the band released their sophomore effort, Electric Elite, their first full-length with vocalist Jordan Jacobs. What was accomplished on their debut was pushed forward tenfold on this release, being a top album of the year. Look for another UK tour with Seven Sisters coming up in 2023.

Skull Fist lead the pack of Canadian NWOTHM bands, having formed back in 2006 and releasing a demo which would become a motto for the band (and the subject of tattoos), No False Metal. By 2022, the band have now released four full-length albums, their latest being Paid in Full. In 2023, the band will embark on a tour of Latin America, ensuring that the way of the fist is eventually known worldwide.

Calgary’s newest group giving shock treatment to the rock scene in the city are the ‘80s-themed Lÿnx. The band has released two EPs and are currently prepping their first full-length album, Claws Out. Once it’s released, expect going into a Lÿnx show and being reminded of that time you saw Guns N’ Roses at a small club in the late ‘80s.

Tight jeans, sleazy mustaches and even sleazier rock n’ roll. Toronto, Ontario’s Deadwolff have the look, the sound and the attitude of the ‘80s incarnate. Formed just two years ago, the band has released a self-titled EP and recently went on the prowl across Canada with friends Rebel Priest. This October, they hit the road with The Casualties, spreading the gospel of the Wolff to the punk crowds of Canada.

Rebel Priest have been described as Motorhead meets Motley Crue. The band plays hard and sleazy, with their song topics being on point as far as ticking the thematic boxes in regards to wild, neon nights. “Lesson in Love” and “Dive Bomber” are stellar tracks featured on their Lesson in Love EP, though I was happy to finally hear a song about those many crushes I’ve had with “Coat Check Girl.”

Striker is another one of those band names shared by about a dozen other bands (including another Canadian band formerly named Stryker), but for today, we will be focusing on this Edmonton-based heavy/power metal band. Formed in 2007, the band has been extremely consistent in both touring and putting out releases, keeping their name in the Canadian metal conversation year after year. While Play to Win was their last LP, released in 2018, the band has still kept busy, with the new single “Strange Love” coming out in 2022.

The sound of a motorcycle revving up before Thunderor kick into “Fire It Up” off of the album of the same name should give you a hint of what’s coming. The riffs build up to a boiling point and then drummer JJ Tartaglia opens his mouth – is that angels I hear? There was no hint of this coming. The Toronto-based band is made up of members from Skull Fist, Autumn Myst and Entropy, and balance the heavier and melodic aspects of speed metal, being a must-listen for fans of the genre.

Hrom is the Slovak and Czech word for thunder, and this Calgary-based band certainly brings it. Formed in 2008, Hrom were ahead of the curve with the NWOTHM revival, establishing themselves in a local scene full of deathgrind and punk, while subsequently releasing their first album, Blesk in 2009. The band then applied themselves and went epic, releasing a two-part album series with Legends of the Powerheart. Both will take you to the past and trap you there.

From Halifax, Nova Scotia, Turbo are your East Coast lovers, who recently released their debut record, Fast as Fvck. Like Riot City, the band has a penchant for cyborg animals on their album cover, with Turbo’s record showing a scissors-wielding raptor with a mech leg and tail blasting off into the sky. Judas Priest’s Turbo, this is not, as the band gets gritty and snarly through the album’s seven tracks.

Another Calgary-based band who are bringing the Canadian tuxedo back in style are Traveler. Formed in 2017 and with two albums to their name already, the band has of late flexed their cover song muscles, contributing “The Prince” to the Diamond Head tribute album Are We Evil? Like Riot City and Turbo, Traveler also incorporate an animalized mascot on their album covers – this time it’s a heavily-tentacled beast.

From Toronto, Diemonds are a hard rock band fronted by the naturally charismatic Priya Panda. After inking a deal with Napalm Records, their second album Never Wanna Die was produced by Eric Ratz (Billy Talent, Cancer Bats) and the band went on to support Steel Panther on their 2016 Canadian tour. Musically, they have some similarities to Halestorm, though their aesthetic and attitude is firmly strutting down the Sunset Strip.

Ex-Skull Fist members Emily Anne and Sir Shred got together with vocalist Dirty D Kerr (Lockhart) to form Axxion in 2011. From Toronto, the band employ a galloping, Iron Maiden-esque feeling. Though instead of riding a stallion, the band is suited for those neon night drives hinted at on the cover of their Back in Time album.

Quebec’s Ültra Raptör take the animal motifs seen with other bands in the scene and make a prehistoric beast their namesake. Well, they couldn’t have picked a better dinosaur to represent the band, as Ültra Raptör are cunning, quick and deadly. These clever girls released their full-length, Tyrants in 2021. The dinosaur eating sacrifices on top of a Mayan temple on the cover should be evidence enough that this is going to rock, but just give “Missile (Metal Warrior)” a listen to remove any doubt.

Babes, beers, brawls and debauchery are what Midnight Malice sing about, and really, who needs anything else in life? The Toronto-based band started in 2010 and have shared and swapped members with Skull Fist. Proving Grounds is their debut album from 2014, which features some impressive tracks such as “In the Dead of Night” and “Pray for Death.” We pray for another release by these babe-loving brawlers.

Kobra and the Lotus

Fronted by the one and only Kobra Paige, Kobra and the Lotus started out in 2008 and are a two-time Juno Award (Canada’s version of the Grammy Awards) nominated band who have shared the stage with the likes of Kiss, Def Leppard, Disturbed, and Sebastian Bach, while performing at festivals such as Wacken, Hellfest and Download. A listicle like this probably won’t do anything for KATL in the long run, as they’ve already hit that high water mark, though if you haven’t checked them out, and are into hard riffs and soaring female vocals, check them out.

Peterborough, Ontario’s MokoMokoi have been at the game since 2011, with their sole full-length album Shores of the Sun coming out in 2018. The band is at times a bit hard to classify – their instrumentals are heavier, sounding similar to doom and stoner bands in songs like “Poison Whiptail”, though John Ellis’ vocal style is undeniably in the traditional heavy metal field. When they speed it up, however, they stand firmly with the rest of the family. Check out “Heavy Metal Sky” and hang onto your head.

Throbbing, melodic, sexy and hypnotic. Cauldron take those sensual mid-tempo rhythm parts that had your mom sweating in the ‘80s and bring them to the modern era. Thus, Cauldron have ensured that future moms across Canada have something to put on when things get a little greasy with five albums released since their appearance on the scene in 2006. Honestly, though, Cauldron bring something that is missing in the scene – focusing on mood and groove rather than speed or high-pitched vocals. Someone put them on the next Nightmare on Elm Street soundtrack.

Forming in 2003, Metalian are one of the earlier bands who devoted themselves to creating traditional heavy metal in Canada (and well before it was considered “in” again). For that, Metalian deserve all the hails. Since their formation, they have released four full-length albums, with 2022’s Beyond the Wall being the latest. The utopia/dystopia separated by a wall on the cover is an intriguing sci-fi concept, with songs like “Rise of the AI” and “Beyond the Wall” fleshing out this theme.

From Kelowna, British Colombia, ArkenFire are five denim-clad men whom perform an endearing, rather straight forward style of traditional heavy metal, with a cosmic twist. “The serpent became enraged. It vowed to send us back. To a darker age from which we won’t return,” vocalist Jacob LeBlanc sings on their track “Leviathan.” If you want a little bit more fantasy mixed in with your heavy metal, ArkenFire have you covered, with songs like “Blood of Gaia” and “Cosmic Sorceress.”

Too metal for metal. This is the title of Ammo’s first single from 2016, but looking at the promo photos of these guys, I wouldn’t doubt that it’s true. The Toronto-based band has been performing purified heavy metal since 2014, with their 2019 EP Taking the Throne being a mashup of the best aspects of Iron Maiden and Dio.