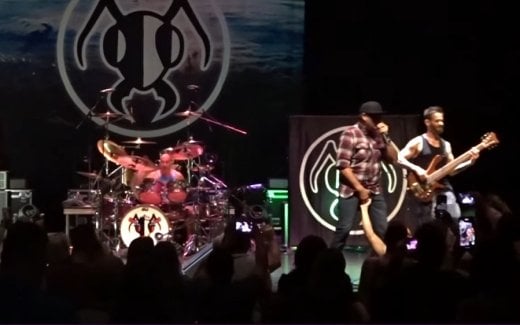 Consent is a word that Alien Ant Farm frontman Dryden Mitchell apparently either doesn’t know or temporarily lost the meaning of in some on-stage fugue state, because the dude violated the hell out of a fan’s consent during a concert back in October. The incident was so egregious that he’s now been charged with battery.

According to a police report obtained by The Daily Mail, the incident occurred during the band’s October 29 show in Fort Lauderdale, Florida.

dsAccording to officials, a 45-year-old male fan in the front row was apparently trying to get a picture with Mitchell while the band performed their Michael Jackson cover, “Smooth Criminal.” The singer then grabbed the fan’s fist and pulled it into his crotch against his pants.

Who the fuck does that?! As you can see from the video below, the fan immediately pulls his hand away.

Police said the fan eventually filed a police report regarding the incident on November 15 with the Fort Lauderdale Police Department. As a result, Mitchell was charged with a first-degree misdemeanor. The report says that the fan waited to file a complaint because “the incident was not sitting well with him.”

“[The fan] did not feel this was proper behavior to do in front of all the concertgoers and also stated there were kids in the crowd as well. [The fan] advised he wanted to report the incident to police.”

The post What a Dick: Alien Ant Farm’s Dryden Mitchell Charged After Forcing a Fan’s Hand Into His Junk appeared first on MetalSucks.