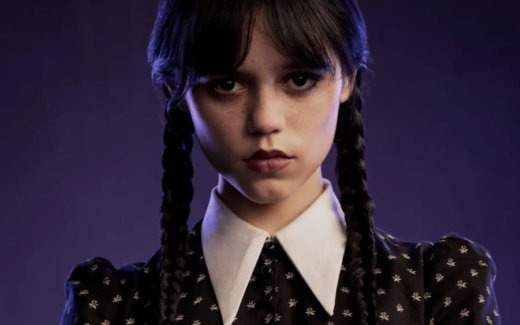 Back in March, we wrote about how Christina Ricci would star in Tim Burton’s upcoming live-action Addams Family series for Netflix, titled Wednesday. However, Ricci would not return to the film as Wednesday Addams, the role which made her famous as a child; instead, that part would be going to actor Jenna Ortega. Now, the first teaser trailer for the show has been released, revealing Ortega as Wednesday Addams for the first time.

Let’s begin by saying, damn, Ortega looks exactly like how we’d imagine a teenage Wednesday Addams. We appreciate that Burton and Netflix didn’t just find someone who looks like a Ricci clone; Ortega looks like her own person, even though she’s wearing the traditional pigtails and dress of the show’s titular heroine. Meanwhile, they also didn’t try to overly-goth the show, or make Wednesday some gothic lolita — there’s a sense of tradition here, staying true to the character’s funereal appearance. That said, we’re stoked to seen what Burton does, as some of his choices — such as casting character actor Luis Guzmán as Gomez Addams — have been very cool but unorthodox.

As for Ricci, not only will she not play Wednesday, but she also won’t play Morticia, either, who is being portrayed by Catherine Zeta Jones (damn, fan thyself, goth kids). Instead, Netflix says she’ll be playing “an exciting new character.”

Apparently, Wednesday will be a “spooky coming-of-age story” that will involve…

“a sleuthing, supernaturally infused mystery charting Wednesday Addams’ years as a student at Nevermore Academy…Wednesday’s attempts to master her emerging psychic ability, thwart a monstrous killing spree that has terrorized the local town, and solve the supernatural mystery that embroiled her parents 25 years ago — all while navigating her new and very tangled relationships.”

Alfred Gough and Miles Millar, known for their work on Smallville, will be writing and showrunning, while goth savant Burton will obviously be directing.

Check out Ortega’s publicity shot for the show, followed by the first trailer: