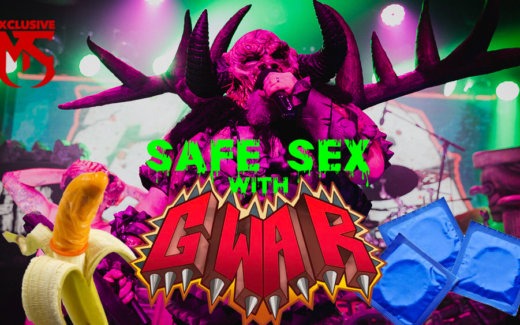 While military history and Viking folklore are subjects about which your average metalhead knows a great deal, sex is a topic about which further education is always needed. And while some of us might have been blessed with a few awkward lessons from a parent, older sibling, tipsy uncle, or gym teacher trying to make some money on the side, the truth is that plenty of people are never taught the nuts and bolts of very basic safe-sex practices. So we thought that we’d get some hands-on advice about the birds and the bees and the butts from a guy who’s been learning about sex ever since he fucked apes in prehistoric times: Blöthar the Berserker of intergalactic sexlords GWAR.

That’s right, in an exclusive video for MetalSucks, Blöthar takes a moment to teach us how to put on a condom. As you can imagine, the hideous alien metal frontman begins by showing us on a banana using his mouth (though it should be noted that his deep-throat skills are pretty abysmal). Then, with the help of one of the poor, unwitting Bohabs of the Slave Pit, Blöthar shows you how to apply a condom to his own wretched, sore-covered wang. And we know what you’re asking yourself right now in the back of your mind: does he bust or what? Guess you’ll just have to watch the video and find out.

Check out the video below. GWAR’s latest album The New Dark Ages is out now wherever slabs of sonic blasphemy can be bought or streamed.

The post Video: GWAR’s Blöthar Teaches You How to Put On a Condom appeared first on MetalSucks.