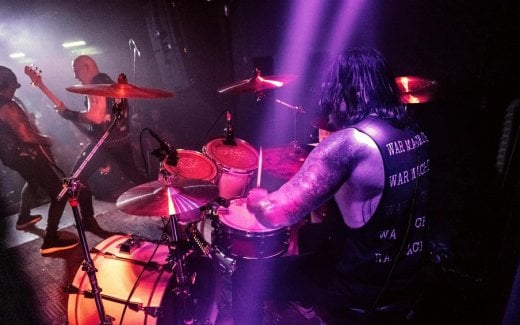 As a normie metal fan, I can’t wrap my head around the kind of coordination it takes to play the drums and play them well. It’s always a treat to get to see someone who knows what the fuck they’re doing behind the kit perform at a high level.

That’s why this video of Venom Inc.‘s drummer Jeramie “War Machine” Kling running through the song “Come To Me” off the band’s latest studio release There’s Only Black is so fascinating. The dude has to keep up the double bass while simultaneously delivering that driving rhythm you hear throughout the whole track. He makes it look so easy, which honestly is the sign of a good drummer.

We haven’t heard a whole lot out of Venom Inc. since they were forced to postpone their latest batch of tour dates due to visa issues. Hopefully we’ll hear some news on that front and get to see Venom Inc. live in the near future. Until then, we’ve got War Machine ripping through some of the band’s killer tracks online.

The post Venom Inc’s Jeramie Kling Urges You to “Come To Me” for This Awesome Drum Cam Footage appeared first on MetalSucks.