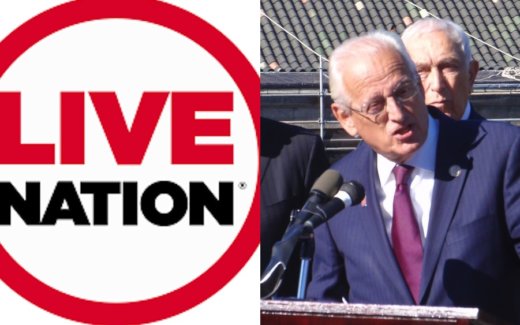 In 2010, Live Nation and Ticketmaster merged to become a massive live-event conglomerate. And earlier this month, that combined company announced its most lucrative quarter to date, with $1.8 billion in profits, according to The Hollywood Reporter. But now, U.S. Representative Bill Pascrell of New Jersey is demanding that the company be split up, citing numerous safety issues that he believes have not been resolved.

Speaking to The New York Post, Pascrell, who once used Metallica song titles to argue for stronger ticket price regulations, claimed that Live Nation has a shoddy safety record, and has not only failed to improve their practices, but has also silenced people who would speak up about them:

“About 200 deaths and 750 injuries occurred at Live Nation events since 2006…Have safety measures not improved? Has Live Nation silenced organizers? I want answers. I think the public deserves to know.

“They may double the profits, and they still didn’t do anything about the safety of folks who go to their concerts. The disaster results are obvious in terms of how many people died.”

“They’ve got to be held accountable, just like any other business.”

As Loudwire notes, Live Nation is currently part of the $750 million lawsuit filed by the families of the victims of Travis Scott’s disastrous Astroworld Festival, which resulted in ten concertgoers dying and hundreds more being injured due to what are perceived as shoddy safety measures and preparations.

Meanwhile, members of the house have previously felt that Live Nation have been dodging their responsibilities regarding the festival, writing:

“Live Nation and its subsidiary reportedly have withheld pay until part-time employees who worked the festival have signed a revised employment contract, correcting the original version signed prior to the festival that was dated 2018. The revision makes it clear that the contract, which includes a broad provision releasing Live Nation from liability, applies to the 2021 festival.”

It also appears that this issue is a cross-party one. While Pascrell is a Democrat, Mark Perry of the conservative American Enterprise Institute called for the same thing in 2021, saying, “It’s only going to get worse unless Washington lawmakers and regulators step in with a fix.”

More as we know about it.

The post U.S. Representative Demands Break Up of Live Nation, Citing “200 Deaths and 750 Injuries Since 2006” appeared first on MetalSucks.