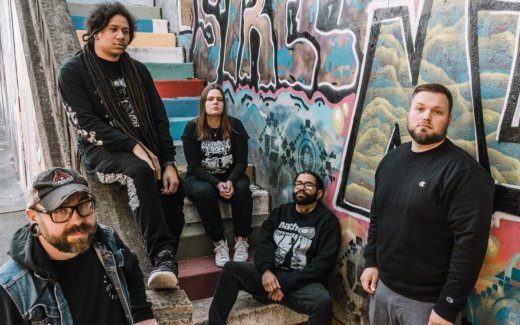 This weekend, I went to the Mutants Of The Monster festival in Little Rock, hosted by Rwake frontman CT and featuring over a dozen of metal and hardcore’s best bands, both young and old (it was there that I got turned on to Knoll, who blew my fucking head off). Kicking off the whole festival was Second Life, who play politically-charged metallic hardcore that was not only awesome to witness but which also came off believably pissed. So I was stoked to learn that the band dropped a new single today with guest vocals by Stan Liszewski of one of Arkansas’s other incredibly rad bands, Terminal Nation.

The track, which you can hear below, is called “Sin & Punishment,” and definitely brings the menace from the get-go. When the first riff oozes forth, you can basically picture a room full of dudes bouncing on the balls of their feet and stretching their arms in anticipation. Then, when the track kicks in proper, the whole thing explodes. Liszewski’s growls during the breakdown that is the latter half of the song add an extra level of planet-gutting misanthropy to the whole thing.

Though maybe ‘misanthropy’ is the wrong term — according to a synopsis of the song (via No Echo), Second Life frontman Mat Johnson had a specific type of human shitstain in mind when writing the song:

“The song came from the killing of Eric Garner and George Floyd. Both were killed in a similar manner but only one of the situations was there any type of punishment given. The topic expands to the larger issue of how common this is to the point of this being normalized as American society due to the abysmal chance of cops facing consequences for killing people.”

Check out “Sin & Punishment” below. Second Life just got signed to Hellminded Records, so expect more from them in the near future.