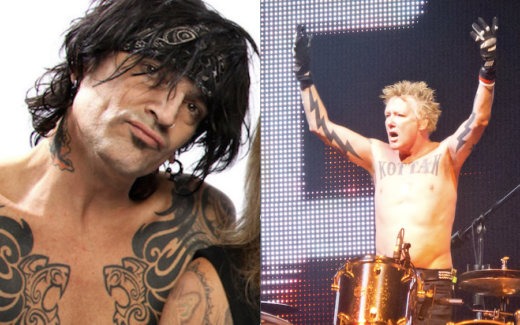 Earlier this week, German hard rockers Kingdom Come came under fire from fans and critics for their disastrous performance at the Sweden Rock Festival. Then, last night, Mötley Crüe drummer Tommy Lee was forced to leave the stage five songs into the first night of the band’s long-awaited Stadium Tour. Now, both musicians have cited the same issue: broken ribs due to recent injury.

As you know or don’t I cracked/broke@ 3-4 ribs on my left side about 15 days ago…OUCH! I did have an off day at Sweden Rock! Thank god for Aleve! Thanks for all your concern @KingdomComeRock @mitchlafon @BLABBERMOUTHNET

Kottak also opened up about his injury to This That & The Other With Troy Pattrick Ferrell, saying (as transcribed by Blabbermouth):

“I wanna say about eight or nine days ago, maybe 10 days ago, in the middle of the night, like four o’clock in the morning, I was in a dead sleep and I just rolled off the bed and I cracked three ribs on my left side. And I went to my chiropractor guy and he says, ‘Oh, you have hairline fractures.’ And I’m, like, ‘Oh, great.’ And dude, it’s just been non-stop pain. It’s not just my ribs; it’s head to toe. That’s why things were a little bit slower. ‘Cause I took ibuprofen and the usual, Aleve or whatever, but, man, it was an uphill battle from the time we started.

“And it was just — I mean, not pain; I’m talking pain-pain, big-time stuff. That’s no excuse, because the show must go on. But, yeah, I was a little slower than usual. But also we [usually] have a click track, of course, ’cause we might have a little bit of playback. Something was up with that, so we were flying solo… And [when] you don’t have it, you go, ‘Oh-oh. Okay. We’ll do this.’ It was just an off day, and there’s nothing you can do about it.”

“Man, y’all ain’t gonna believe this shit…I broke 4 fucking ribs! But I’ve been resting and healing and even though the doctor tells me I shouldn’t play at all, you know I’m stubborn and I’ll beast through the pain every show for as many songs as I can! And have no fear, my boy Tommy Clufetos is here to help me out until I’m back at 100%…we’ve all been waiting years for this moment and there’s now way I’m missing this! On with the show!”

Okay, so let’s take everything at face value: sucks for these dudes, and we wish them a speedy recovery.

What I’m really thinking? I dunno, I’m dubious. With Tommy Lee, I’m wondering what happened. Did he fall? In the days leading up to a tour this important, shouldn’t he have been in isolation? And why not just announce this before the tour’s launch, rather than midway through a set where the whole band seemed to be having a hard time?

As for Kottak, commenters on our initial post mentioned that he has a history with drinking. And if his bandmates knew he was injured — and four broken ribs is a serious injury, my dad once broke two ribs and could barely move. — why not just either call it or try to find a ringer? Did he really think Aleve was the answer?

ANYway, all that aside, we hope for the fans’ sake that Tommy pulls through and is able to play through a full set at some point on this tour. Catch Mötley Crüe at one fo the remaining dates below: